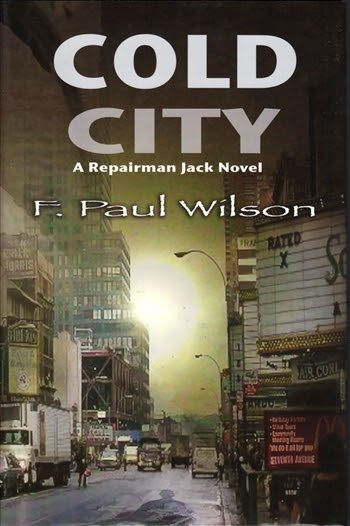 Repairman Jack is one of the most exciting characters ever to come out of the mind of F. Paul Wilson, who in his spare time, when he is not writing, is a practicing physician in Wall, New Jersey. It would take a Jersey Boy to create someone as interesting and unique as Repairman Jack.

Some of the writers, beside myself, who are fans of Repairman Jack are Lee Childs, Stephen King, Charlaine Harris, Dean Koontz, Joe R. Lansdale, and Andrew Vacchss. That’s just a handful; there are more. Once I read my first Repairman Jack book, Harbingers, I was hooked.

I don’t recommend beginning there because that’s kind of the middle of a long story. Actually, I think wrong; I began with Infernal, which introduced me to Jack’s brother Tom, who is a practicing judge in Philadelphia.

It might appear that Jack is the black sheep in the family, but families have many secrets and sometimes our brothers and sisters might be in competition for that title. We don’t always know them as well as we think we do. In the book Infernal, Jack’s brother Tom cons Jack into going on a treasure hunt looking for a wreck off the coast of Bermuda.

As is often the case with Jack’s adventures, things go astray. I’m not going to ruin the book for you by giving you the storyline. I will tell you that Jack hangs out in a bar called The Spot, which is run by Julio, who becomes a close friend, and the search for treasure turns into a dark tale of mystery and power.

Repairman Jack doesn’t exist. Well, he is real, but a tragic event in his life causes him to have reason to stay hidden from society. He has no Social Security card, pays no taxes and because of his desire to protect the people he loves, Jack becomes a ghost in the machine of civilization. He is a repairman because he implements solutions to problems that can’t be fixed by legitimate means. They are problems that can only be solved by someone who can’t be traced or identified.

You will love Repairman Jack. What’s nice about that is the fact that there are over 16 books of his adventures, and they all tell tales that are continuous and yet, they also stand alone. You’ll know when you are nearing the end of the Repairman Jack story because his books tend to end with cliffhangers.

Perhaps you would enjoy starting with the book named Dark City, which is one of the early histories of Jack. It’s not the earliest history of Jack; the beginning of his story is told in a series of three books written for Young Adults.

We all have to begin somewhere, don’t we? The first Young Adult book is called Jack: Secret Histories and it begins with Jack growing up in the pine barrens of New Jersey, when he is in high school. I suggest you start reading about Jack here. Isn’t everyone really a young adult, a child who happened to get wrinkled and grey?

I remember flying up the stairs when I was young. Now I trudge up the stairway to the wonderful apartment where I live. However, I fly through the books I read and then I write about them. I even write about myself from time to time. I’ve heard many people say, “my life is so interesting I could write a book about it,” but they never do.

I found out through holding writing workshops that many people enjoy talking about writing but when it comes to picking up the pen and putting it to the empty page, that is another story.

F. Paul Wilson dares to put the pen to the page, and he has created a character whose adventures tear through a minimum of at least 16 books. Repairman Jack is not the only character Dr. Wilson created—he wrote a story called SIMS, divided into five novellas that deal with genetic engineering.

In the third book of the young adult series a tragic event takes place that changes Jack’s life forever. No, I won’t tell you what it is—but every boy, from a good home, loves his mother. Once you finish Secret Histories, Secret Circles, and Secret Vengeance, you are ready to enter the next trilogy, which takes Repairman Jack to the Dark City.

In the Dark City you will meet Abe, who is a mensch who runs the Isher Sports Shop. Abe becomes one of Jack’s closest friends. Does anyone reading this remember the Weapon Shop of Isher? Google it, my friend, and be enlightened. The writer A. E. Van Vogt would want you to do this.

Then there is Jacks adversary, Rasalom, who is first introduced in F. Paul Wilson’s book called The Keep. This story takes place during the hell of Nazi Germany, in the way back of 1941. The Keep is in the Dinu Pass, in Romania and it was created to contain—well, needless to say, one of the most frightening enemies of Repairman Jack series arises from The Keep. I cannot say more.

People clamor for F. Paul Wilson to write more Repairman Jack books, however, it appears that he may be done. Yet, one can always hope. Some might say—isn’t 16 + books enough? I say thee, nay, there can never be enough Repairman Jack. Now all we need is some movies. Really.