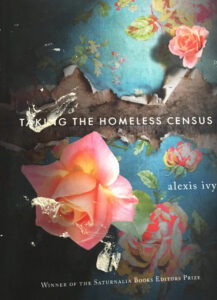 I read this marvelous book of poetry three times upon receiving it. It’s no wonder to me that her Crown of Sonnets named “The A-Street Shelter: A Crown of Sonnets” won the 2018 Massachusetts Cultural Council Fellowship In Poetry prize.

“Taking The Homeless Census” brings the reader into the world of homelessness with a jolt. One can tell that Alexis Ivy has been in this world in more ways than one. As a worker in the Albany Street Shelter, her heart was touched deeply by what she experienced.

We’ll let her own words speak for her, direct from this award winning book.

Past their home, I came to poetry,
their home where I shout Female on the floor
whenever I enter, I have come to see
who’s turned blue, turned dead, where there’s a fight
to de-escalate. If someone’s feet
stink, there’ll be blood, and I don’t want
to circle “guest assault”, write out neat
and tidy Restriction with my name. Taunted
Troublemaker gets high, Medicine Taker
breathes unevenly in bed ten, the leaden
light stays on, bed no one wants. Tyler,
shit-kicked for the way he snores. New beds
given each day, Pick a chip from the tin.
No one’s at home here: No one’s in.

No one’s at home here: No one’s in.
The cook thinks, they can only get one plate, it’s
the drunks who try for two, bread stuffed in
their pockets ‘cause she starves us. Dinner is
served early-bird with outbursts: that was my
seat, everyone pushing to the front of the line,
one man’s face pressed into the greens and fried
mashed potatoes she’s undercooked. For lunch,
donated sandwiches. She’ll wait a day so
she can serve them stale. One table of men
are given okra and corn, pie. She’ll slice a whole
smiling melon into six pieces for them.
Their afros, cut the same: so statuesque
as clean as their cocaine. They deal the best.

As clean as their cocaine. They deal the best
on the first of the month—street queen Gail buys
it all for her pimp with her SSI check,
smiles until the last hit then her eyes
are hungry again. And here comes Pete
robbed a market when he opens up
his backpack, drunk on Vodka, he sleeps
it off in a chair. The girl they call Trollop
signed up for Disability. I knew
her bloating was from Hep C. She leaves
the mice her bread crumbs, it’s their home too.
Mice in the male room, mice in the beef’s grease.
So much for free when you are living in
the shelter. Paying for every minute of it.

That’s just the first three pieces of her Crown of Sonnets; if you want the next 12 pieces, you’ll have to buy Alexis Ivy’s book. I’ve seen it on Amazon but with the ISBN I’ve provided you can order it at one of your local bookstores such as the Harvard Book Store, Porter Square Booksellers, or Trident Books which is on Newbury Street. Alexis Ivy has traveled the Homeless Road from many directions. She no longer needs a street map; she’s paid for every minute of it. She’s the co-dependent angel of the streets and her poems are the wings on her back. Ivy grows in heaven; but her wings are singed from the fires of hell.

Taking The Homeless Census is the best book of poetry I’ve read in years. Alexis Ivy walks with Lew Welch and his book Ring of Bone; travels with poet Jack Spicer, the man who’s dying words were, “My vocabulary did this to me.” Spicer also said that “poets are the dictation machine of the gods.” Alexis Ivy could be that and also the dictation machine of the devil. If you are a lover of Martin Espada’s poetry, you will dance to the tune of Alexis Ivy’s poetry in both of her books: Romance With Small Time Crooks and her award winning book Taking The Homeless Census.

And I’ll let the words of Alexis Ivy finish this review.

The Poem, an Ars Poetica

Poems come to me smelling of trashcan fire
and whiskey. The smell I am to launder
off. And I give each a bed roll. It’s my
life. Full-time. I live in this smell. I conjure
this smell, sleep with this smell. I can’t
write another sonnet. These poems, homier,
like to camp with a blanket on public cement.
Poems believe in no rules. Ruleless is cozier,
and so the poems stay with me, where they’re
not held accountable for making my bed, being
responsible. I thought I could write them
asleep in my unmade bed. Every evening
they strike my last match—burnt, sulphury,
needy. I need them to revise the fire in me.

But I’m a poet too so I’m also a liar. Alexis Ivy’s poems are valuable gems; will they buy her a ring? Will they fill her bank account? Probably not, unless every one who loves poetry, in this world, buys her book. She gave me one book; I’ll buy two; one for me; one for you. Taking The Homeless Census is the best book on the street. I ought to know; I’m not only a poet—I come from the streets Alexis Ivy writes about.