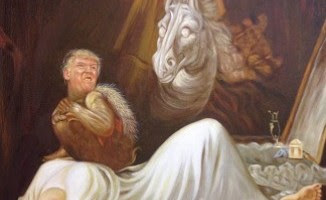 A Demon In The White House

Red hair, pouchy bags under his eyes, lips that are always open when he is lying to the people of the United States and the world. When did he sell his soul to the devil; how long ago was it? He has little demons that he employs; one of them is named Barr; he is an attorney general who speaks to free criminals like Stone.

The demon speaks the language of bullies all over the world and our children watch him and imitate him like the two kindergartners in Utah who told a Latino boy that Trump, the red headed demon, would deport him back to Mexico. Teenagers in Maine spoke out and said “Ban Muslims” to a classmate wearing a hijab.

Sanctuary cities are being attacked by the demon’s minions to terrorize immigrants and the Statue of Liberty is weeping tears, but the demon doesn’t care as he flaunts his evil ways across the country. The demon always chooses cruelty but has his little demons do his work because, deep inside him, despite his blustery mouth, he is afraid, like most bullies are.

The demon sends his uniformed demons with guns and badges calling them the department of homeland security into the Boston area from February to May. Other cities under attack by the red headed demon in the white house are New York, Chicago, San Francisco, Los Angeles, Atlanta, Houston, New Orleans, Detroit and Newark, N.J.

This action by the demon team is quite possibly unconstitutional under the Fourth Amendment. The Fourth Amendment prohibits the use of excessive force by demons of law enforcement. A sanctuary city does not allow their police to work with ICE demons whose sole duty is to deport immigrants back to hell.

The most recent action to depose the demon has caused him to draw circles around himself by firing people who have worked in the white house for many years. The demon can’t trust anyone but other little demons who yearn and burn for his cause which is to destroy the United States freedom that we used to take for granted.

Even his little demon son, the Donald Trump, Jr. said on the internet that the attack was useful because it “unearthing who all needed to be fired,” into the sights of the hell world. The demon has said disloyalty to hell is disloyalty to the United States. He is spinning a cocoon of protective fire around his demon self and is aflame with fury that none of his attackers have been arrested.

The demon says, “Be paranoid. Now that sounds terrible. But you have to realize that people, sadly, sadly, are very vicious. You think we’re so different from the lions in the jungle? I don’t know.” These are words from the lying lips of this demon from hell from a motivational seminar that took place in the year 2000 before the demon ascended to the oval office.

Also, the demon-in-chief doesn’t want to be subjected to truth through the Freedom of Information Act. Hell is a place where lies prosper. Demons don’t want honesty; they want shadows and lies.

If it wasn’t for the FOIA we wouldn’t know that the government of demons had Black Lives Matter activists under surveillance. We would not know that coal miners were being shut out of their health benefits for black lung disease. And we would never have found out the truth about the demon’s decision to stop military aid to the Ukraine.

The demon-in-chief doesn’t like MuckRock working to get hidden information about what led to the attack on the red-headed-demon from hell. Not only do Black Lives Matter but the Truth Matters Too! Demons like to do their work hidden from the people and are hoping to overturn our Democracy.

The demon-in-chief even wanted to subvert the Census, which determines how the Electoral College counts votes by putting a question in asking about citizenship which would frighten legal noncitizens from answering the Census. Even noncitizen residents of the United States count when it comes to elections.

The demon-in-chief wants to subvert our Democracy and steal another term so he can dismantle our country. This thing in the oval office wants fascism to overtake our freedoms because demons like to rule, not govern.

Demons are not rational. Demons are xenophobic. When our demon-in-chief saw the statistics about Nigerian immigration in the United States he cried out in 2017, that once the Nigerians were in the U.S., they would never “go back to their huts” in Africa. More than 1 in 3 Nigerian immigrants work in the US health industry. They also work in science, technology and engineering fields.

The demon said once, “why are we having all these people from shithole countries come here?” This red-headed freak who is posing as President is imposing travel bans and closing the windows and doors on a quarter of Africa’s population.

Every step It takes, the demon shreds our freedoms, attacks people with disabilities, attacks LBGQT people and women’s rights and brings our country closer to the gates of hell, which is fascism. We must force the xenophobic demon out and take his cronies out too. There is no time to waste. “If not now, when? If not you, who?” The climate is on fire and not just here but everywhere.