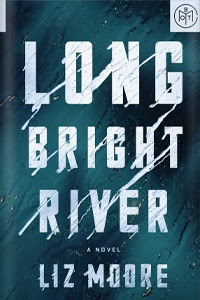 Long Bright River by Liz Moore / “Published by Hutchinson Books affiliated with Penguin Random House; ISBN: 978-1-78-633162-5, Both in the USA and the United Kingdom”

“In 2009, Liz Moore accompanied photographer Jeffrey Stockbridge to the Philadephia neighbourhood of Kensington, where he was documenting the human cost of the area’s high rate of opioid addiction. The interviews and sketches she began to write on the subject laid the foundations of her fourth book, Long Bright River, a novel 10 years in the making that bears witness to the author’s extensive research and first-hand experience of the lives of those who fall through the cracks.”

“Long Bright Mirror” by Liz Moore, is a book that is both frightening and warm, about two sisters in Philadelphia who have been slammed by the opiate crisis. Mickey or Michaela, the older sister has become a police officer who regularly patrols the 24th District called Kensington.

Her younger sister, Kacey, a heroin addict, is a working woman of the streets. The two women, both going in different directions but related to each other by blood and life choices, are on opposite sides of the opiate crisis that has worn Philadelphia thin, as it has done to many cities in the world.

Back when I was using, court mandated to a methadone clinic, my former wife, who now rests in the sleep of death, and I were traveling down to see my parents, also gone, in Florida. The only way we could travel was to get legal permission to stop and be dosed by clinics as we rode the dark highway.

One of our stops, traveling from Massachusetts, was a methadone clinic in Philadelphia and I was struck by the multitude of people of all shapes, sizes, and races that were waiting to be dosed. We had legal papers from the clinic in Cambridge and it still took a while to be processed for our legal fix. I could tell that Philadelphia, even back in the 1980’s, was a heroin city.

But back to “Long Bright River” and Mickey the police officer who says, “The first time I found my sister dead, she was sixteen.” When it comes to heroin, an addict can die many times, if they are lucky enough to be Narcaned back to life, cursing and spitting at their twisted fate.

Mickey runs across overdose victims so often that she becomes armored, however, that does not mean she doesn’t shed inner tears at the fate of the women who work the area she patrols. Her great fear, as she approaches what may be a body with the soul already gone—or not—that it is her sister Kacey.

Michaela (Mickey) and Kacey were brought up by their grandmother Gee, who is an angry and wounded woman, because her daughter Lisa, Michaela and Kacey’s mother, died of an overdose. Their father Daniel stuck around for a little while but then he fled to seek oblivion in some other dark bathroom.

The police patrols have gotten tense because there is a killer in town, someone who is strangling the women of the streets, scattering the streets with murdered sex workers. Some of the police really don’t care much; other police, such as Mickey, have a total investment in bringing this killer to his final end or justice, whichever comes first.

Every time Mickey and her ever changing partners come upon a body, she reacts and thinks, “She’s not Kacey. That’s my first thought: Thank God, I don’t know her. Her death was recent: that’s my second. She hasn’t been lying here long. There’s nothing soft about her, nothing slack. Instead she’s stiff, lying on her back, one arm contracted upward so that her hand has become a claw. Her face is contorted and sharp; her eyes are unpleasantly open. Usually, in overdoses, they’re closed—which always gives some measure of comfort.”

The book has flashbacks to the past that show the relationship between the two sisters when they were young, how extremely close they were and how they were united against the sometime bitterness of Gee, their grandmother who was reluctantly trying to raise them.

The house was a three bedroom, but Gee slept in one bedroom and the two sisters slept in another. The middle bedroom was the one where their mother, Lisa, was found dead and neither of the sisters want to rest in a haunted room.

The book is a tale of hunting and haunting; searching for Kacey who is missing but not found dead; searching for the predator who hunts the sad women of the streets; and in the meantime, Mickey is hunting for a police partner that she can work with; someone who has empathy for her hopeful search for her sister. Michaela and her young son Thomas are also searching for their family.

This is a powerful tale, full of twists and turns. Liz Moore spins a terrifying story of a city full of ghosts, some living, some in half-life, and others already dead. Moore was a winner of the 2014 Rome Prize in Literature and is herself a resident of Philadelphia.

Just the other day I saw this book, signed copies, in the Harvard Book Store, which I frequent quite often. Please pick it up—you won’t regret it.