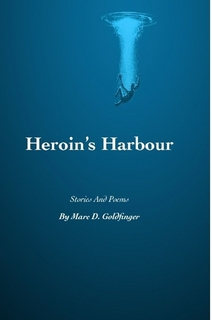 Heroin’s harbor is the addict, as Marc D. Goldfinger’s collection of poems and stories, Heroin’s Harbour makes harrowingly clear. Heroin is the body of the addict that craves the drug, and it’s the mind of the addict that cooperates with the insistent body, paradoxically rationalizing any action that might provide safe harbor for a poison. Human beings are frail things, ultimately, Goldfinger’s poems and stories illustrate, too weak to commit to our resolutions or to stave off gratifications that have become needs. Goldfinger’s work does more than merely describe the habits, lifestyle, and thoughts of a junkie; he takes his reader hostage, straps us to the back of his motorcycle so that we do more than simply observe—we participate. Goldfinger’s craft enables us, along with him, to feel the needle and the need.

In “A Junkie’s Prayer,” one of the first poems in the first section of Heroin’s Harbour, “An Epistle to Opium,” the reader is told what the junkie prays for: not redemption, not relief, not freedom from addiction. The narrator of this poem is so embedded in his world of dependency—the “harbor” of the drug—that what is prayed for are his most immediate needs: “please keep our needles disease free”; “keep us safe from those who would poison our dope”; “keep the police the police from our door”; “keep us free from abscess.” What is prayed for is not an escape, but that “heroin’s sweet sleep” will “ease the pain that lives within our hearts.” The junkie does not beg for a way out and doesn’t seem to want one, asking only that God “keep watch over the farmers and the fields of poppies they tend.”

Love itself for the junkie isn’t to be found through religion, as Goldfinger testifies in “Drug Store Christ (Heist): “They tell me to turn to Jesus Christ/ Just wait till I do this drug store heist/ . . . ‘Well, we found God/Just sittin’ in the safe of that drug store.’” And True Love for one’s significant other, as described in “Junkie Love” means “giving her the biggest hit,” or when you’re strung out and broke and don’t ask her to hit the streets.”

Again and again, Goldfinger repeats the message stated in “Death Trippin,” one of the poems written in hard driving couplets that he suggests are “songs” but are all the more frightening in that they come off more as feverish rants: “One thing I know, Heroin’s the best/ For nullifying the pain that’s in my chest.” The shift from reading Goldfinger’s poems to reading his short stories is like a shift from listening to songs to watching a movie that uses those songs as background music. The refrain stated in the poem “Getting Fixed in South Carolina”: “addiction only remembers what it needs” throbs through the prose of stories that describe in detail the underworld of junkies. There are stories about dealing with crooked pharmacists and hard-ass police (“A Controlled Dangerous Substance Act”); stories about navigating life with various women who shared the narrator’s addictions (“Femme Fatale”); stories about obtaining prescriptions from doctors (“Running on Empty in Vermont”); stories about living in filth and failing to care for those innocents for whom you’re responsible (“Two Dogs and a Kitten”). The long poem “Getting Fixed in South Carolina” is itself expanded into a short story that depicts the life-threatening hazards a junkie will undertake to satisfy his habit. These stories powerfully convey the life of addicts whose focus is reduced to remembering “what it needs.” But even detailed stories are insufficiently descriptive, Goldfinger asserts in “The Rocking Chair,” which shows a recovering junkie’s return home to aged and ailing parents: “The imagination is limited when it comes to the real. Things get left out.”

Recovery for the junkie seems a struggle doomed to Sisyphean failure. In his second section of poems, “The Fight to Stay Clean,” Goldfinger presents several portraits of those lost to drugs (“Medusa with Fire,” “One of the Tough Guys,” “Significant Other,” “Open Casket,” “The Way She Shakes”), or those who will be (“A Couple of Kids”). But there is a whisper of hope in the sisterhood of “The Angels of Gloucester,” who “walk an ancient path now, join hands at signs of trouble, hug each other’s children, knit their families into hot strong blankets with threads of prayer.” Ultimately, Goldfinger points to the necessity of the recovering junkie never losing sight of the fact that he is “The Split Man”: two alternate realities, this poem illustrates, are perpetually present, contending for the junkie’s heart: “I am the happy married man/ the junkie in the street begging/ the house-owner sitting  sitting at my computer/ in the bathroom sticking a needle in my arm . . . / I am a split man, this half of me dances with joy/ I am a split man, this half of me is dying day by day/ I can choose, I can stand by a lake holding the hand of my wife/ or my choices are gone, I probe my arm looking for a vein.”

With devastating honesty and heartbreaking detail, Marc D. Goldfinger offers in his poems and stories glimpses into the lives of tortured souls who have abandoned themselves to an all-consuming, unsafe harbor. “A junkie’s body never forgets,” he concludes in the poem “All of Me”: “If it was just physical, I would never use dope/ again. It is not my body, it is me, all of me, my body, my soul, my mind/ interlocked in heroin hypnosis, even/ free, I will never be free again.” Goldfinger’s words seem less buoys warning of an unsafe passage than a testament to the hope of a single split man’s survival. — Gregory J. Wolos