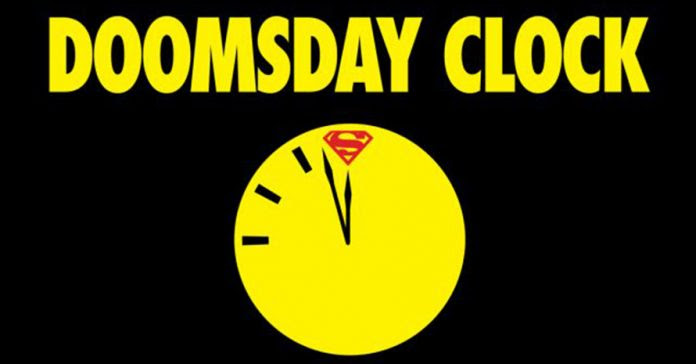 It’s official. As of Monday morning, January 6, 2020 the Impeachment of President Trump is on the second page of the Boston Globe. Clearly our President took a lesson from a previous Republican president. When polls threaten to decline, start a war.

The Doomsday Clock is now at two minutes to midnight because of the Climate Chaos, the imminent threat of nuclear war and the basic instability of so many countries in the world. Iran is abandoning its pact to limit nuclear arms and announced it will enrich uranium without restriction.

Our halfway Impeached President Trump warned Iran that he has targeted 52 sites inside their borders, which include cultural sites. This is retaliation for the 52 hostages held at the US Embassy in Tehran during the Islamic Revolution in 1979, so he says.

It appears that we have a madman at the helm of state in America. Forget that he doesn’t believe in Global Warming or the incipient deep fry of our planet! Forget that he doesn’t really care about common people like us and only favors his rich cronies and crooked Senate pals like Mitch McConnell. We try to forget but we just can’t.

Our national debt has increased astronomically since Trump took office while losing the popular vote. I know, I know, what would Hillary Clinton have done? Well, I don’t believe that she would have done as much damage as Trump in the short time that he has been in power.

Do you feel safe yet? Does the fact that scientists all over the world think that Donald Trump is an idiot mean anything to you? Are we safe?

I remember in the movie Marathon Man with Dustin Hoffman when people kept asking, “Is it safe?” as the code which meant that things were totally out of control!

Okay, I enjoy these big football games coming up even though the Patriots are out of the running. I like the San Francisco 49’ers led by Jimmy Garoppolo and the Baltimore Ravens led by Lamar Jackson. Really readers, but so what!!!

Our world is on a high state of war alert just because we have a crazy red-headed stepchild at the nuclear control button. This isn’t about some crazy television show where he can just fire people, bomb people, burn the world to the ground around us.

The rain forests are burning; the continent of Australia is burning; the state of California is burning; New Orleans and Florida are beginning to drown; weather events are destroying the infrastructure of our civilization and only a 17 year-old woman named Greta Thunberg is making sense.

How did this situation begin? Are the people who keep Trump in power really this stupid or is it only in my quite active imagination that things have gone FUBAR? Is anyone controlling him? Who are they?

Is it safe? How safe do you feel right now? Do you know that homelessness is rising across the world in startling numbers? Just look around your cities. I mean really take a look. Should people in what is foolishly regarded as one of the richest countries be out on the streets begging?

Greta Thunberg and the Extinction Rebellion and the Sunrise Movement and Greenpeace would make a better government than we have now.

Please people, wake up! The Doomsday Clock is two minutes to midnight and at midnight everything ends, so to speak. The question is what are we going to do to make things right? Somebody must make a move. This is checkmate folks.