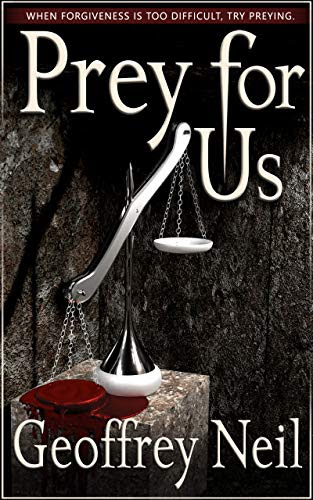 I was introduced to Geoffrey Neil’s wonderful writing because his first book, Dire Means, was about homelessness in Santa Monica, California where some extremely devious people tried to end homelessness through evil means. In that book, I met a woman named Morana Mahker, who was very skilled at both eliminating people and tracking their movements with
sophisticated technology.

IPrey For Us begins with Morana fleeing her last debacle where many people were killed. There is a one million dollar reward for information leading to her arrest. Believe it or not, this situation has very little to do with the events in this challenging story. However, Morana is at her best, dealing with a brilliant man who discovered how ancient Egyptians were able to move the giant stones that built the pyramids.

Just for kicks, dear reader, why don’t you Google Coral Castle and look into the life of an amazing man named Ed Leedskalnin who created Coral Castle in Florida. Now you’ll have some clues as to what this book, Prey For Us, is about!

Geoffrey Neil is one hell of a writer. This is his 4th book and he still kicks ass every step of the way with great characters. First of all, there is the previously mentioned Morana Mahker. Do not think you can mess with this woman; she will mess you up and kill you if she has too. If she doesn’t have to kill you she can still do you in, and you’ll love her every step of the way. Then you’ll meet her fair weather friend, Clay Thorner, who is, and I quote from the book, “a computer hacker and a gun enthusiast.” But can you trust him? Is he only out for himself? Is he always preying?

Another character is Thane Sykes, who is closely related, in the way his mind works, to Ed Leedskalnin of Coral Castle fame. Or did you not Google the guy when I first mentioned him? Let me make one thing clear. Geoffrey Neil, the writer, has no affiliation whatsoever with Coral Castle. Like most writers, he takes an idea that already exists and moves it into the reality of his fiction.

Thane Sykes has enemies. He’s had enemies for a long time, even before he became a reclusive miracle worker. Are his enemies deadly? Well, they are not as deadly as his newfound friend Morana Mahker. But who’s side is she really on? Who are the real heroes in this book?

The talents of Thane Sykes bring Morana and Clay into an uneasy alliance. Geoffrey Neil, the fearless writer, will keep you guessing throughout the book. I started the book two days ago and I’m already up to page 152 and I don’t want this story to end. Certain books are like that. F. Paul Wilson, famous for his Repairman Jack series, is a master story spinner and Geoffrey Neil is just that.

Did I mention the lawyer Waylon Snells? He’s much more than just a lawyer and he happens to hate Thane Sykes. They grew up together and Waylon was Thane’s nemesis all through school. There’s a lot of history there.

Prey For Us is a fantastic read. Once you start, you’ll find little time for anything else. The twists and turns will leave your head spinning. Morana Mahker’s strange and terrible history is part of the story. And here’s an extra for you. Go to http://gneil.co/sublairtour . I hope you can find your way out! I also recommend Geoffrey Neil’s wonderful book named Dire Means, which impacts on homelessness but in a way that will freak you out. All of his books are wonderfully frightening.