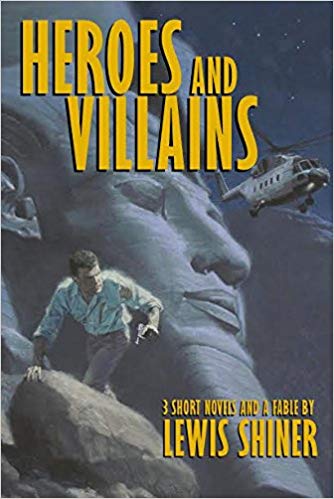 “Heroes And Villains” is a wonderful book containing three short novels and a fable. Lewis Shiner is a master of creating alternate universes of many varied types. First, let’s talk about Lewis Shiner. He is a fabulous writer who deals excellently with different genres. He has been publishing his works through many different publishing houses. I’ve just read “Heroes And Villains” and my two favorite stories in the collection are “The Black Sun” and “The Next.” But “Doctor Helios” is also a pretty close third. The story called “Doglandia” was good, but didn’t live up to the expectations of the other three tales.

“The Black Sun” is about five stage magicians who are so threatened by Adolph Hitler in 1934 that they concoct a plan to destroy him. The story is filled with major twists and turns and had me totally engrossed. This is alternate history at its best and all the characters were well fleshed out. At times, I was frightened by the magnitude of the task they had set out to accomplish.

I don’t want to reveal much about the story, because I’m sure you will be on the edge of your seat as I was. We all know the damage that Adolph Hitler wreaked upon the world and Lewis Shiner does a masterful job of creating and describing the realities of all characters, both good and evil, in “The Black Sun.”

In “The Next”, Lewis Shiner creates a world where humanity is broken up into two species. One human type is just like us and the other is a deadly predator that lurks among us and takes the best of what we have. Tom Davis is a lawyer, middle-aged, with two teenage boys. He is a single dad. Tom is a lawyer but he’s one of the good guys. He gets handed a case that everyone says is open and shut; about a crazy biker who kills a young woman outside a bar. His firm gives him the case because they want the biker to go down for the crime. But there are so many extenuating circumstances that Tom gets really suspicious. Tom doesn’t like the biker, but he feels that the guy is really being set up for a fall. So he begins to investigate, which is exactly what he was not supposed to do. Things get really dark as the story goes on and I’m not one to give you spoilers. I want you to enjoy the tale and be as surprised as I was when you find out the true nature of the bad guys. By the way, the bad guys are not all men!

The story called “Doctor Helios” is about a secret agent whose job it is to take down a guy who has visions of world domination in Egypt in the year 1963. At first it’s a mystery as to who the guy really is, but you find out soon enough. The women involved with secret agent York are targeted by the mysterious Doctor Helios, who owns a majority of the oil fields and shipping companies that move his oil around the world. Things get rather tense as York and Helios square off against each other. It certainly appears that Helios is more than York can handle, but York attracts people who are on his side. I’ll leave the destructive details for you to discover.

“Doglandia” resembles an “Animal Farm” tale and was the shortest of the four stories in the book. It’s about a band of junkyard dogs and what they have to contend with when a big Rottweiler decides he’s going to run things like a military unit. And then there are the cats, who appear to be the smartest of them all. Actually, as I think about it, it really was a good tale and I’m not giving it enough credit. All the stories in the book “Heroes And Villains” are a great read. After you finish that book you might want to leap to his next book, written in 1993, called “Glimpses”, which brings you back to the hard rock era of Jimi Hendrix, the Beatles, and the nostalgia of the late sixties and seventies. It’s one of his best books, in my opinion, but then I grew up in that era so I’m attached to it.

“Glimpses” is about a guy named Ray Shackleford, who makes a living fixing stereos in his workshop on the upper level of his home. Suddenly he begins to hear music by Jim Morrison and the Doors that these groups never made. But the music really sounds like theirs. Then he hears the Beatles album that they never finished. The music is in his head, and when he turns on his tapes, the music is recorded there. But that’s not all folks. I’m only thirty pages into the book and I’m hooked. His wife is a teacher and she thinks he’s going crazy. But the proof is on the tapes. Lewis Shiner is a miracle worker as an author. He has just finished a book called “Outside The Gates of Eden” and George R. R. Martin of “Game of Thrones” fame loves his work. Martin has this to say about the upcoming book which will be published by Subterranean Press: “‘Outside The Gates of Eden’ is a powerful piece of work.

Shiner writes about music, and the making of music, better than anyone I know. He gets across the tremendous excitement of the early days of rock n’ roll, the peace movement, Woodstock and the Summer of Love—but also the heartbreak of failure, betrayal, and loss. The prose is terrific, and the sense of time and place is first rate. This book is a brilliant requiem for our generation and our dreams.” I figured, on “Outside The Gates of Eden” I’d let George Martin take you there because I haven’t read it yet. But I’m totally looking forward to it. You can get all these books through the Subterranean Press or Amazon. “Heroes and Villains” is a great book and so far, so is “Glimpses.” I hope I have intrigued you enough to give Lewis Shiner a look over. I know you’ll find him to be a wonderful creator of visions.