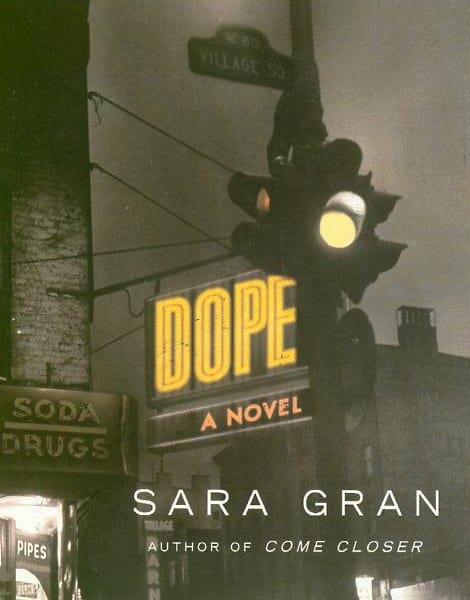 All of a sudden the reader is thrust into the 1950’s, but not the false innocence of that era. You are in New York City with Josephine Flannigan, a former heroin addict who has been abstinent for two years, who still struggles with the desire to use. She supports herself still by boosting small scores from department stores and selling her ill-gotten gains to the fringe buyers who turn the stuff over for a higher price to their customers.

This is “Dope.” It is a period of time where there are no Narcotics Anonymous meetings; the junkie is on her own. Out of nowhere, Josephine is approached by what appears to be a lawyer and his wife whose daughter vanished into the netherworld of heroin addiction and hasn’t been heard from for a long while. They offer Josephine $1,000 up front to begin her search for Nadine, and tell her another thousand dollars will be waiting for her if she wirings their daughter home to them. For a start, they give her a picture of Nadine and her junkie boyfriend.

Josephine has kept away from her using buddies for a long time, occasionally running into them on the street, but only by accident. This is the first time since she quit that she thrusts herself back into the world of junkies, whores, pimps and everyone else that inhabits the world of dark clouds and dreams that lie.

Josephine’s boyfriend is a guy named Jim Cohen, a man who seems nice but a shroud of mystery surrounds him. He doesn’t use, has a nice apartment and drives a brand new Oldsmobile ’88. He asks Josephine if she’s going to just take the grand and disappear or really look for Nadine.

Josephine thinks of her sister Shelley, whom she has extricated from one jam after another, who has finally made it good in the modeling world. She decides to look for Nadine.

Little by little, Josephine digs into the underworld she knows so well. Or thinks she knows. The trail winds and twists as she goes from one place to another, finding it easier to track the boyfriend first, a guy who goes by the name of Jerry McFall, a small time pimp and dope dealer who no one seems to have anything positive to say about him.

Old contacts are made and, as the job begins to wear on her, she finds the cravings to use drugs rise to the surface. She also notices someone driving a black Chevrolet following her. She keeps losing him but he always resurfaces. Sara Gran, the young author who has also written a horror story named “Come Closer” which is regarded as one of the best horror tales of the last 20 years, has a feel for the era as if she lived it. And she’s got the junkies pegged for sure. “A junkie could talk about junk from sunup to sundown. It was a conversation that began when you took your first shot and didn’t end until you’d had your last. Every junkie in New York, probably every addict in the world, could step into the conversation at any point and join in. There were a thousand and one topics, but they were all one topic: dope.”

When it comes to twists and turns, Raymond Chandler couldn’t do better. As Josephine searches, the light around her dims and then, suddenly she falls down the rabbit hole. No one is who they seem to be and, as if often the case with narcotics cops, they come roaring into the story, and all they can do is talk about junkies, dealers and whores and “tell us the truth because we know everything anyway” is what they say in the book.

When the trail seems to get hot, the heat is scalding and Josephine finds herself with complex choices to make. This story gets into your gut and it isn’t really a story about junkies but about us. The only time people in the underworld are lying is when their lips are moving.

This book will make a great gift for anyone who loves to read.