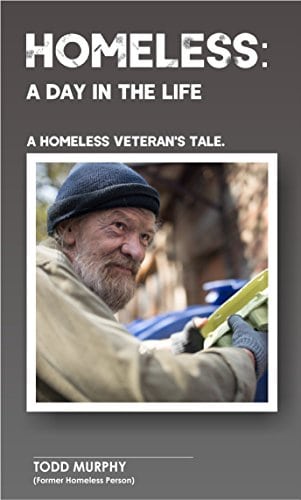 Homeless: A Day In The Life by Todd Murphy: A Book Review by Marc D. Goldfinger. ISBN 9781987763119 So you can order the book from a local independent store.

This book really brought back the old times of my being homeless. The one very big difference is that this man, who calls himself ‘our friend’ throughout the book, is not an addict. The story is totally engrossing as he travels through a north-western city and describes his different struggles to stay afloat. I couldn’t say that our friend had a hustle; he just worked hard at what he did to stay alive. He avoided the shelters for the same reasons I did—the shelters were not safe. But when you are homeless, no place is really safe because there is no where to go- except for the places you know, and none of them are home.

The book was written by our friend, and it covers his homelessness for approximately 2 and 1/2 years. I don’t believe this was totally Todd Murphy’s story but his experiences on the street are woven seamlessly into the narrative. In this narratives, our friend has presents a running story based on what is happening to him. He describes the superstitions of many homeless people, and because I spent quite a bit of time homeless, I could relate to them. Of course my narratives revolved around my heroin addiction which made my homeless experience a bit different from our friend’s homeless experience. His only addictions were the tobacco, coffee, and marijuana. Because marijuana has no withdrawal symptoms, it was only his fear of running out that spurred him on.

He had dumpster diving down to a science, depending on collection times, and differing between restaurant dumpsters and apartment dumpsters. Todd had ways of testing the food that came from a dumpster to see if it was good, so he wouldn’t get the running shits that burned. He was very sensitive to how he smelled when he used public bathrooms and he constantly struggled to stay as clean as he could, managing with a variety of methods. He collected ‘good’ cigarette butts and when he was in the money, bought Bugler tobacco. No day went by without a struggle to find tobacco which he smoked in a pipe. He layered the pipe with tobacco at the bottom, pot in the middle, and another layer of tobacco on top. There was a park that Todd frequented in the city. One of the draws of the park was a dealer who sold one gram chunks of pot. Todd also had some acquaintances that hung around this park. The police didn’t come there often; it was not a park that families went to with their children, which would have brought the police. Todd stressed the importance of having a picture Identification card. If you didn’t have one and you were shaken down by the police, it was likely that you would be arrested for ‘failure to identify.’

A drawback of homeless shelters was, that if you were ‘asked to leave’, which meant thrown out, they might not return anything you left with them to hold. If your identification card was lost in this type of situation, you were really screwed. Shelters also had so many rules that it was almost impossible to frequent one without some conflict that might get you thrown out and cause you to lose your precious possesions. Todd, in the book, describes the proper response when approached by the police. One should act submissively and never talk back. Always say “sir” when addressing the police, and if they look at your identification card and hand it back to you, never forget to say “Thank you sir.” This book is a comprehensive tale of a man living on the streets and can easily be acquired by buying it on Amazon. I looked for it on eBay but couldn’t find it. On Amazon, it was available and had three 5 star ratings. When I looked it up on Amazon, a popup bubble said I could read it for free on their Kindle but, in my opinion, Todd Murphy put so much work into this book that I hope you buy the hard copy.