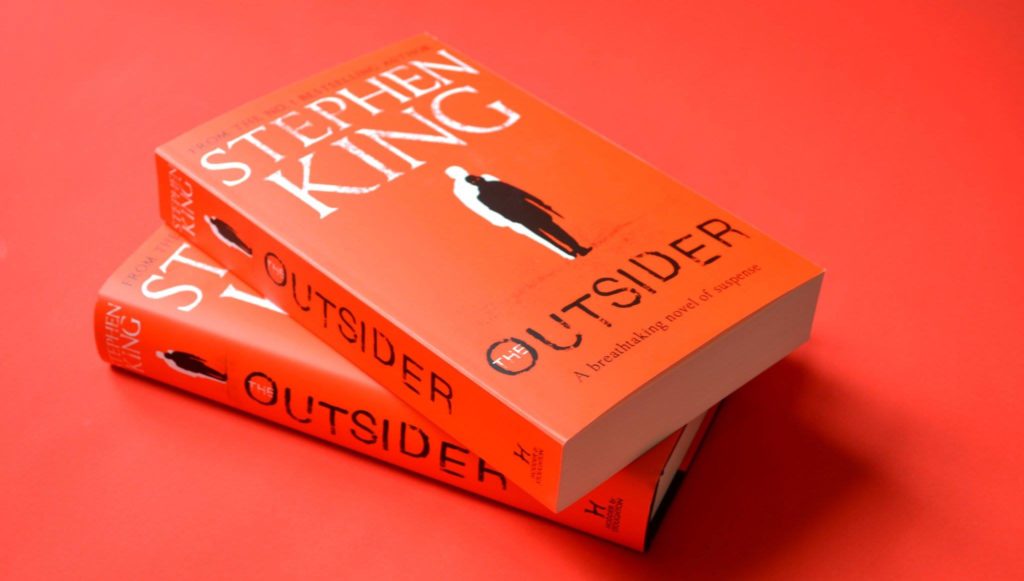 The Outsider by Stephen King: A Book Review by Marc D. Goldfinger. Published by Simon and Schuster in the year of 2018, by Stephen King, all rights reserved. On the internet go to SimonandSchuster.com to meet the authors.

A confluence of events take place when a murder takes place and Detective Ralph Anderson is convinced that he knows who the culprit is. The unlikely suspect, convicted in the minds of the Detective and the Prosecutor Bill Samuels, is Terry Maitland who is an English teacher and the Little League coach in Flint City.

Terry Maitland is liked by all and would be the last person to be suspect of this horrible crime perpetrated upon a high school boy named Frank Peterson, yet the DNA leads the law enforcement community to the Coach, not to mention a few witnesses who saw Terry Maitland in places he shouldn’t have been with blood on his clothes.

The City League tournament game is running hot and Terry Maitland, who really cares for his team is coaching away as the unmarked detective car with Ralph Anderson and Troy Ramage, another police officer with twenty years of service under his belt, drives in and parks in a handicapped spot, the only one left, so they can walk across the field and make an extremely public arrest of Terry Maitland.

The whole town of Flint City is watching. Troy Ramage and Tom Yates, two city cops in suits, walk down the third base line and the umpire is yelling at them to get off the field and the game is tied 2 to 2. The excitement can be felt but now there is an element of confusion as the two police officers in suits ignore the umpire and walk directly towards Tom Maitland. His wife Marcy and their two children watch in confusion. “Off the Field” yells the umpire but they keep walking down the base line directly towards Tom Maitland. “Hey, you guys” the umpire says as he walks toward the two cops, “We’ve got a game to finish here.” It’s the top of the ninth inning and the score is tied, two to two. Yates, the cop, pushes the umpire back and they keep walking in lockstep towards Terry Maitland. Terry says, “Hey Troy, what is this? What’s the deal? Suddenly the crowd is hushed and people realize something is about to happen.

Troy Ramage raises his voice as he gets to Maitland and says, loudspeaker not necessary because everyone is so quiet, “Terence Maitland, I am arresting you for the murder of Frank Peterson!”

There is a sound from the bleachers, an oooo like a rising wind.

All Terry could say was “What? Are you kidding me? and just then the sports photographer from the Flint City Call snaps the picture, the one that will be on the front page of the newspaper the next day. Terry’s mouth was open, wide-eyed with his hair sticking out the edges of his Golden Dragons cap. The picture made him look feeble and guilty.

“Hold out your wrists, please.”

Terry locked eyes with his wife Marcy and his two daughters, sitting just behind the bullpen, staring at him with identical expressions of shock and surprise. Ramage snapped on the cuffs, the big metal ones, not the plastic strips, big, visible and heavy, shining in the hot sun. In the same loudspeaker voice, Ramages says the familiar but strange to Terry, “You have the right to remain silent and refuse to answer questions, but if you choose to speak, anything you say can be held against you in a court of law. You have the right to an attorney during questioning now or in the future. Do you understand?”

Ramage looked at Terrry and repeated, “DO YOU UNDERSTAND?”

What Terry Maitland did understand was that his life, as he knew it, was over for a long time and maybe beyond that.

So Stephen King, master of suspense and horror begins his new novel called The Outsider. His magic continues throughout the book and twists and turns in a way that only an expert in
his art can do!

Later in the book, the appearance of Holly Gibney, the woman who worked with Detective Hodges, in King’s book called End Of Watch is no surprise. This is her speciality.

If you are looking for a beach book or just a book to read under the lamp while you lay in bed, The Outsider is that book. I bought it at The Harvard Bookstore and finished it in three days.

The King family are miracle workers with words, even if the miracles are dark and possible make you look under the bed to see it the Outsider is hiding there.

There are jail tattoos that play a part in this book, one on each hand. One hand says MUST and the other says CANT. If you are a drug addict, these words will filter into your mind because the fact is, with the illness of addiction, you are trapped in this quandary that says you CANT use drugs, but you MUST use drugs.

What does this have to do with the story? Well, you’ll have to read it to find out. And speaking again of the King family, don’t forget Joe Hill and Owen King, Stephen’s sons, and his wife Tabitha, who also spins the webs of words.

This book is a great book. It’s a horrifying book, but what else does Stephen King do. Would you like to take a walk in his mind, eh?