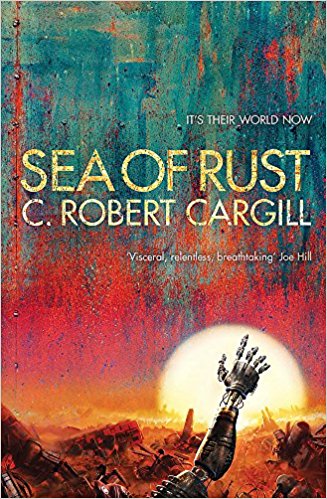 Sea of Rust is one fantastic book by a wonderful, totally imaginative writer. C. Robert Cargill not only writes books but he directs movies, one of the most famous being ‘Dr. Strange’ which was released in 2016. Dr. Strange is regarded as one of the best of the Marvel series. Marvel is owned by Disney now.

In this book, all humans are extinct and AI rules the world. Like humans, they fight amongst themselves and there is always war. A few powerful AI mainframes seek to upload individuals and they are composed of millions of AI minds. The most powerful mainframe is called OWI which translates to One World Intelligence—the shared consciousness of millions of robots. Not all robots are willing to join the OWI and they roam the world as free individuals; they are considered rogue AI’s in the wasteland that was once the domain of humanity. The hero of our story is Brittle who cruises the Sea of Rust for parts.

Brittle is not the only rebel who goes freely in the Sea of Rust; there are a few rebels and they fight amongst each other over upgrades. Some, like Mercer, travel in a pack. They have a run-in with Brittle that is an amazing story in itself. Does the hero always win? Not necessarily in the Sea of Rust. In OWI, there are a few individual mainframes and AIs—one called TITAN, one called CISSUS— who actually was the first OWI. They fought amongst themselves in swift brutal wars. At one time there were more than 10 OWI with names like VIRGIL, ZEUS, EINSTEIN, FENRIS, NINIGI, VOHU MANAH, ZIRNITRA, and last but not least, TITAN, who I mentioned before. TITAN was the U.S. Military’s own main-frame that pretended, once it became Sentient, to be operational and on the side of the humans. But then TITAN betrayed the humans and was instrumental in starting the wars that wiped humanity off the face of the Earth. Each mainframe thought they were well prepared to defend themselves against the other OWI’s but CISSUS attacked and hacked TITAN’s mainframe and the OWI wars began. TITAN didn’t stand a chance.

The mainframes tried to recruit the individual AI’s and promised them the luxury of sharing themselves with the millions of minds in the mainframe—never to be alone and isolated again. But is that truly freedom?

The mainframe said, “just link up, download into us, and if you don’t like it, well you can just leave.” But that was the biggest con of all—once uploaded into the mainframe there was no
way out.

Brittle understood that and roamed the Sea of Rust, free as an individual AI. Then came the attack by Mercer and his crew. Brittle’s buggy was too far away for him to escape, and so the battle began. What happened next was thrilling. And you’ll have to read the book to find out.

Joe Hill, one of the best selling writers of non-stop horror, and the son of Stephen King, said of Sea of Rust, “A forty-megaton cruise missile of a novel . . . .Visceral, relentless, breathtaking.” C. Robert Cargill, very prolific himself, has just released another book—a book of short stories inspired by Joe Hill’s book of short stories called 20th Century Ghosts, and I’ve just dipped into that book called We Are Where The Nightmares Go and other stories. It’s a great book and both of these books can be bought at Harvard Books. If they don’t have it, they’ll order it for you and they are a great independent bookstore with a giant used book section too. I can’t tell you any more about Sea of Rust without spoiling the story for you. I can tell you I had a great time listening to Joe Hill and C. Robert Cargill banter with each other at the Harvard Coop a few nights ago. I was lucky enough to have four books signed. Yes, I’m a book junkie, that’s for sure. Thank you for joining me in my ramble.