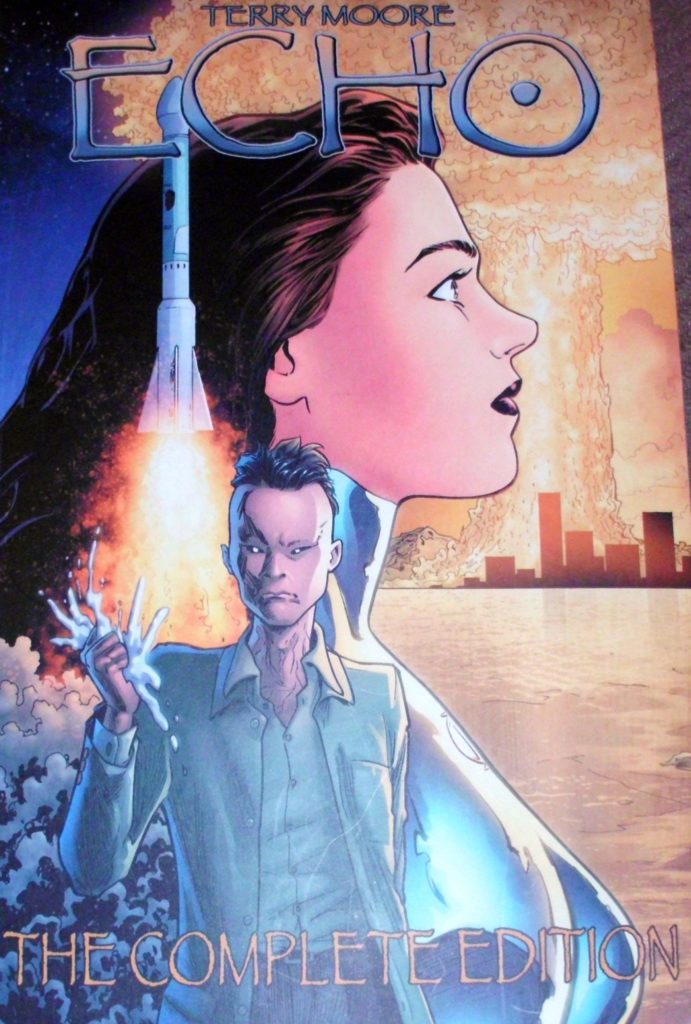 I just finished reading Echo by Terry Moore for the second time. This is an unbelievable story about a young woman who is testing a nuclear beta suit that covers her body like skin and enables her to fly as fast as a jet plane. Her name is Dr. Annie Trotter and this is part of what HENRI ( Heinrich Nuclear Research Institute) is testing.

The man second in charge is Jack Cooper and they have decided that Dr. Annie Trotter is in the way of what they want to create with this material. They have made a decision to shoot her out of the sky and recover the material when it falls to earth in a secluded area called Moon Lake. What they didn’t count on was a photographer named Julie Martin taking pictures in the Moon Lake area and also a homeless man with a Jesus complex in the same area. When the suit breaks apart after Dr. Trotter is killed by a missile it forms itself into small pellets that fall all around the Moon Lake area, the majority of them hitting Julie and her truck with some other pellets hitting the homeless man.

When Julie touches her truck the pellets swarm together and form a thin breast plate on her that she cannot remove and the homeless man has less pellets but just enough to cover one of his hands.

Julie doesn’t realize it but she has become a nuclear weapon and HENRI will stop at nothing to recover the material even though it will kill her if they try to remove it. The homeless man thinks this material is a gift from God so he can remove the evil from the world with his hand as the Hand of God.

Dr. Annie Trotter, deceased, had a boyfriend named Dillon Murphy who works as a Park Ranger and is very familiar with the Moon Lake area. Dillon is also extremely upset when he finds out that the woman he loves is dead and HENRI has no body to show him. He runs into Julie Martin and is a witness when the army tries to take her into custody and without meaning to, Julie blows the soldiers to hell.

Julie Martin has a sister named Pam whose family was in a terrible accident and her husband and children were killed and she now resides in a psychiatric facility. She is extremely empathic and plays a part in this thrilling story.

The art and text in this giant graphic novel is fantastic and Terry Moore is responsible for it all. The science fiction writer Harlan Ellison says this about Terry Moore and Echo: “Terry Moore does an acre more straight-up memorable storytelling in one black & white issue of Echo than either of the two comic’s giants’ in a years’-worth of their prolix, boring, barren crossover ‘events. This, ECHO, is what we long for, would die for.”

Annie’s distraught boyfriend Dillon decides to help Julie Martin with her predicament, not fully realizing what he is getting into. Also, Dillon has a group of friends that are hardcore Bikers
and he enlists their aid. The head of the biker group, a giant of a man named Dan Backer has been watching HENRI and different events that have been taking place in their area and he suspects them of creating dangerous elements that they let loose in the area where his bike club roams.

Jack Cooper, from HENRI, hires a woman named Ivy Raven to track down Julie and take her into custody but doesn’t reveal all the facts to her. HENRI wants the material back to conduct an experiment that could destroy the world; building a machine that is called a Collider and they want to create a Black Hole.

Once you start reading Echo, you will be hooked, as I was.

“People like us, who believe in physics, know that the distinction between past, present, and
future is only a stubbornly persistent illusion.”—Albert Einstein