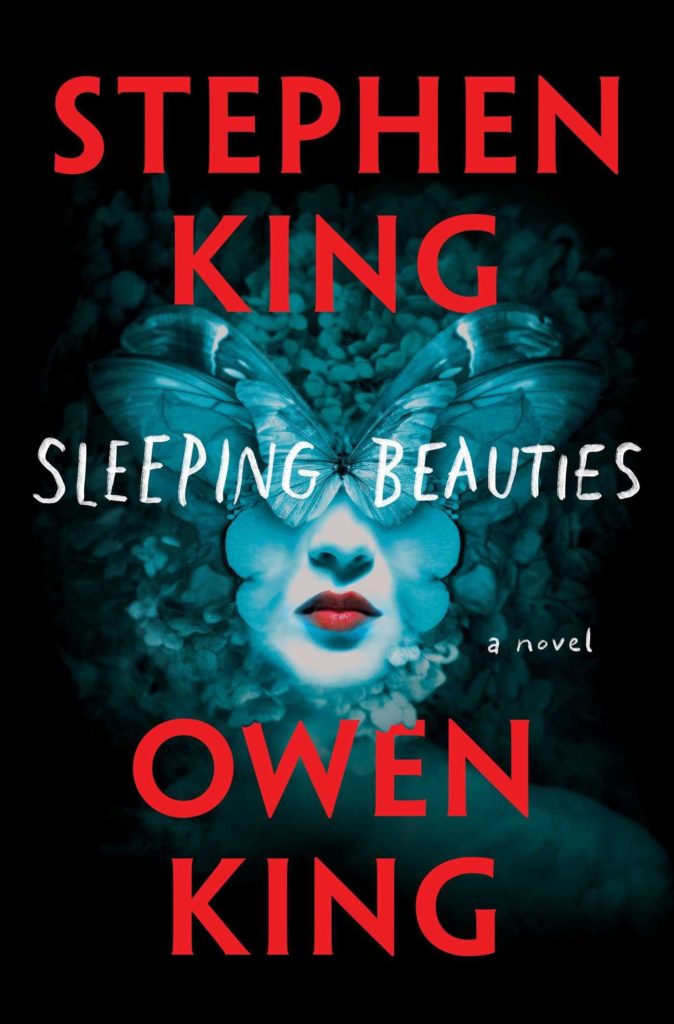 This book is an insane thriller and it is also a father and son re-union.  Owen King has written a few books by himself but this time he teamed up with his dad, Stephen King, to write a book about a disease that affects women when they go to sleep.

They sleep and a soft growth like the cocoon of a moth grows out of their mouths and covers their heads and the rest of their bodies.  But if you peel the cocoon off of their faces to get to them, the women go wild and become berserk killers.

In Dooling County, a relatively small women’s prison in the Appalachian Mountains, people are frightened because what you don’t know is more threatening than what you think you know.

The book begins when a meth lab blows up and a woman they refer to as the ‘Avon Lady’ kills the chemist by putting his head through the trailer wall.  Linny Mars, the desk dispatcher, takes the 911 call from Tiffany Jones, who is freaking out.

At first Linny Mars doesn’t believe Tiffany Jones but then she hears a boom in the background.  Linny asks Tiffany how they will be able to identify the ‘Avon Lady’ and Tiffany tells her that she’ll be the woman covered with the chemist’s , Truman Mayweather’s, blood.

Linny calls Lila Norcross, the deputy on duty, who doubts everything until she sees the smoke rising up near Adam’s lumberyard.  Then Lila sets out for the scene of the crime.

This book is full of twists and turns and women who are desperately trying to stay awake.  If you can imagine a women’s prison, staffed 50 per cent by women, where the male staff are always trying to get a little piece of sex from dissatisfied women who don’t want any part of it.

Dooling Correctional is a prison that has never won any awards for excellence.  There is too much going on there for that to happen.  Stephen King and Owen King work like madmen creating an insane world with a bizarre disease called the Aurora Sickness.

How is the disease spread? Does a moth carry it?  Does the Aurora Sickness affect animals?  There is a woman named Evie who can talk to animals.  She is locked up in the Dooling Correctional Center.  She sleeps but does not seem to be affected by the Aurora Sickness.  The cocoon never covers her.

Evie was arrested under the name of Eve Black after she blew up the meth lab where she killed Truman Mayweather and another gentleman.  I’ll use the word loosely here.

Stephen King and Owen King have been working together since Owen was a child.  Their first collaboration was not for public consumption.  Growing up in a house full of writers, Stephen, Tabitha, Joe and Owen were all full of word soul.

On the kitchen table there was an ongoing story where everyone took part.  Each person tried to leave the story in a place where it would take some verbal maneuvering to get the hero/heroine out of a seemingly impossible jam.

There is a talking fox, a Mother Tree, and what does Eve Black have to do with the Aurora Sickness that covers women with something like webbing or while they appear to be asleep? Do the women who are sleeping in the cocoon communicate with each other in another psychic world?

While the men in the story think of the webbing and sleeping women as sick in the grips of a strange disease, it could it be just the opposite.  Why is it that when a person tries to strip the webbing from a woman’s face to wake her up, the woman reacts violently and slays the intruder as if they are invading a world where they are resting peacefully?

Owen King and Stephen King have come up with a story that is a dark fairy tale and very different than the fairy tale of the Sleeping Beauty where a kiss can bring the princess back to life.  It is quite possible that the women are enjoying being where they are in dreamland.

This book, Sleeping Beauties, is an evil tale and it is another King Conspiracy.  You can find it at the Harvard Book Store, where I bought mine, or on the Internet.  This appears to be Owen King’s breakthrough novel and I am sure that Joe Hill, Owen’s brother, is excited that another member of his family has reached out to twist the mind of the American and European public.

Don’t miss this twisted tale by Owen and Stephen King.