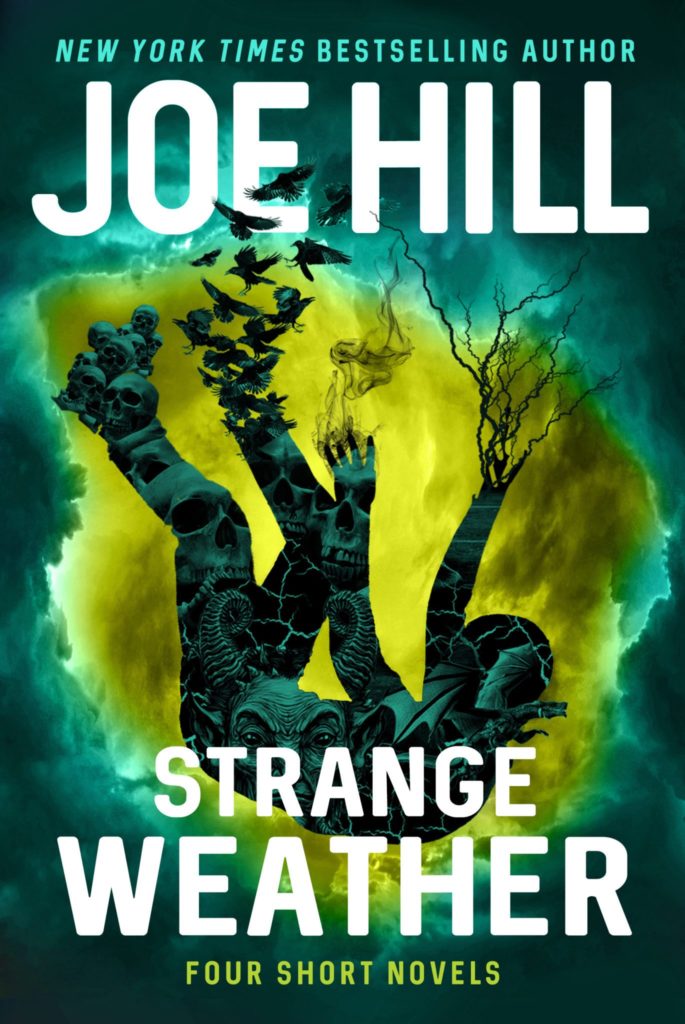 Joe Hill knocks a home run out of the park with all bases loaded with Strange Weather, 4 novellas that will twist your mind and make your heart skip two beats a minute.

Strange Weather it is, with a major eclipse crossing the United States, an insane clown president with glowing eyes and a mouth that twitters faster than his brain, if he’s got one.

When there is a book of novellas, there is always one that strikes me as my favorite. My rainbow twist of the four is Loaded, about a mall security guard named Randall Kellaway back from the war in the Mid-East, not having served with honors for sure. He is crazy about guns but is far from being a true gunslinger (he lacks honor).

Kellaway isn’t allowed to have guns but he has plenty. And so does the disgruntled employee from the jewelry store that comes to take her revenge with a fancy revolver. She discovered her boss flashing her sex over the Internet and pulled the trigger.

Kellaway comes in with his illegal piece, sees a Muslim woman with something clutched to her chest and everything goes wrong. A witness sees everything and then it all goes black.

There’s a story behind everything that goes wrong in Loaded but that’s Joe Hill’s job. And he does it with finesse. His dad, Stephen King, has created a true gunslinger in Joe and he’ll never forget the face of his father; never be sent west. (Reference to The Dark Tower by Stephen King).

In another story called Aloft there’s a gent named Aubrey Griffin, frightened of heights, who agrees to a sky jump in honor of a dead friend. However, it all goes wrong because there’s a cloud that is alive and it won’t let him pass.

I’ll say no more than Joe Hill has his guns out and they are blazing throughout the length of this novella. Clouds are only supposed to bring Rain, which is the name of the final novella.

The rain that fell was sharp and solid and as deadly as Joe Hill’s words. Truthfully, Joe’s words are as deadly as the bullets that fly from a gunslinger’s heavy gun. Strange Weather is a collection of four stories that will truly keep you awake and realizing that Stephen King’s apple has not fallen far from the tree. In one of the stories a strange man carries a Polaroid camera that takes pictures and makes people forget. Joe Hill has here captured the imagination of his avid readers. He really does quite an excellent job on these novellas, as well as on his other short stories and novels.

Joe Hill’s first book was a book of short stories called 20th Century Ghosts; then he moved quickly to A Heart-Shaped Box, where a man who has played hard (like Ozzie Osbourn) buys a suit that travels with a deadly ghost that plays with a sharp silver blade. A Heart-Shaped Box would make a wonderful movie but it just hasn’t been done yet. Hopefully a good director will pick it up.

His other three novels are Horns, Nos4a2 and The Fireman. He blows the hole out of the bulls-eye on every single book. I would be remiss if I didn’t mention his graphic novel by the name of Locke & Key, a book about keys that open doors to other realities and the family that is both blessed and cursed by them.

One other novella that Joe Hill wrote while he was traveling to a writer’s convention in 2006 is named Gunpowder, and is about teenagers with special talents who live on another planet. It is a powerful story in a hardcover all by itself in 3 forms. All three are hardcovers, one has no dust jacket, one does have a dust jacket, and the third is the deluxe edition with a dust jacket and slipcase. The first is a regular trade, the second is signed and numbered by Joe Hill, and the third is signed and numbered by Joe Hill and the artist Gabriel Rodriguez. They are all wonderful and rare.

There is a rumor that Joe is going to lengthen Gunpowder to a full-length novel and this would be great. But right now I highly recommend you buy a copy of Strange Weather. It will be released on October 24th but you can pre-order a signed copy on the Internet from Waterstreet books. It’s so good I just read Loaded for the second time.

I haven’t yet read anything by Stephen King’s other son, Owen. But I’m hoping that he’ll be just as exciting as the rest of the writing family. His new book, Sleeping Beauties, which Owen co-wrote with his father, will be released at the end of September.

These are the days of Strange Weather, which will follow the eclipse. Joe Hill is one of the great writers of these days.