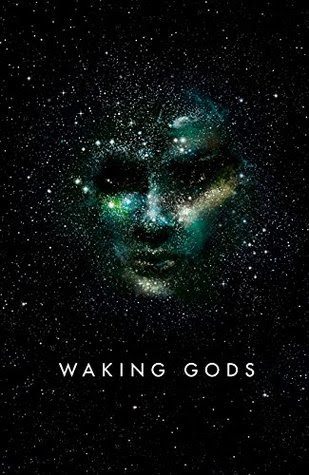 In doing this book review of Waking Gods, which is Book Two of The Themis Files, I find myself in a quandary. When I write a review of a wonderful book, this time a series of 3 books, I don’t like to insert spoilers.

We have a problem. What if you, dear reader, have not yet read Sleeping Giants, which is the 1st book of the series, and you are intrigued by what is happening? In this series, The Themis Files, it is definitely a requirement to read Sleeping Giants before reading Waking Gods.

Let me say this—Waking Gods is a wonderful book and it could stand by itself, however, if you don’t read Sleeping Giants first, there will be much of the story that you will be missing. You might think you understand what is happening in Book Two, however, there may be pieces that you don’t quite understand because of the intricate nature of the invasion of earth by a yet undefined species.

Oh, was that a spoiler? I think not. That sentence gives no more information than little blurbs about Sleeping Giants that are easily found on the Internet. Especially if you go to Sylvain Neuvel’s website and find out interesting facts about the author.

Sylvain quit high school at the age of fifteen but at some point in his life, due to an expanding curiosity, he went back to school and received his PHD. in Linguistics. He also became a father who told a story about giant robots to his son and then, when his son began asking questions in depth about the robots, Sylvain had to come up with a back story.

Which he did. And that is lucky for you because, if it weren’t for the back-story, you would not have a fantastic trilogy of books to read, already optioned by Sony for a movie. It will probably be more than one movie. After all, look at what happened to Hunger Games and this story is wonderfully equal to that tale.

I really hate to inform you what happens when the Waking Gods appear. When the giant machines appear in densely populated areas of the world, they come with attitude. Only the Sleeping Giant can stand against them but there is quite a cost to humanity and the aliens.

Do you trust your government? Can you trust god-like beings with amazing powers that can raze cities to bare earth? The giants and Themis go toe to toe and the cost can be quite high.

You will be amazed by the events that take place in this series. I cannot wait to read the 3rd book and book 2 is only coming out in April of 2017. From one step to the next, the mystery of where these aliens come from and our relationship to them becomes intertwined. Is it possible that they have changed the face of out civilization starting eons ago?

The tension in book one was excruciating, but Waking Gods made Sleeping Giants seem like a walk in the park. I’m thrilled with the twists and turns that take place as the aliens drop into our cities all over the world.

In book one, the story was a search and find expedition and as the giant robot comes together, the human operators are altered in such a way that we can doubt the pure genes of the humans on earth. I really don’t want to discuss the attacks that take place in the cities, but they reveal facts that change the history of humankind.

Life and death are not open to conjecture at this point. This is one of the best scientific series of the history of the world that I have ever read. I have read that this story can be compared to The Martian by Andy Weir or World War Z, because of the style it was written.

To compare those two books because of the style in which they were written is a gross error. Sleeping Giants and Waking Gods pulled me along in the narrative and I found it difficult to put the books down. Sylvain Neuvel, the writer, is at home in his medium and is one of the best writers I’ve ever experienced. I’m really excited to find out how the final book of the Themis Trilogy wraps up.

Until then the Waking Gods strike in mid April. You’ll be sure to find a copy at the Harvard Bookstore. They’ll order one for you happily if they sell out. Enjoy!