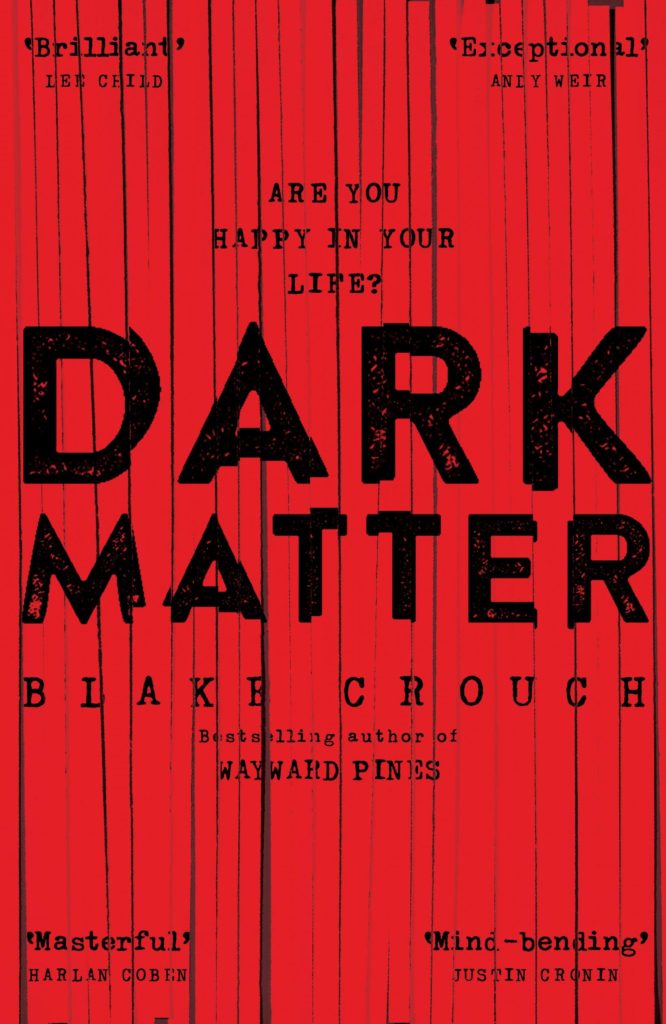 “What might have been and what has been
point to one end, which is always present.
Footfalls echo in the memory
Down the passage which we did not take
Towards the door we never opened.”—T.S. Eliot from “Burnt Norton”

Jason Desson is sitting at the dinner table with the family he loves very much. His son is fifteen and his name is Charlie. His beautiful wife is named Daniela and she watches him with her dark Spanish eyes.

Jason loves his life and can’t imagine anything different. He teaches at Lakemont College, a class in physics, and he enjoys that too. He could have been so much more if he had gone into the private experimental sector but he made a choice and doesn’t regret it.

Well, maybe sometimes he does have a twinge of regret. His wife was on the fast track in the art world and she gave all that up to raise a family and become a teacher too. The paths we choose change everything about our lives.

Then there is Ryan Holder, Jason’s friend and former colleague, who just won the Pavia Prize for identifying the pre -frontal cortex as a consciousness generator. Jason is at the celebration, where Ryan gives him a hard time because he thinks that Jason could have won the prize if he hadn’t gone into teaching.

Jason, who feels quite lucky to be married to Daniela with a wonderful son, fills with anger and leaves the celebration. And that is when the change begins.

It’s one thing to be kidnapped for ransom. But it is quite another thing to be kidnapped and sent to another world where your life is totally different and you become the award winning physicist, but lose your wife and family. Suddenly you are rich and famous, but alone and miserable, and not to mention scared to death about what just seemed to happen to your life.

It also raises the question of who has taken your place in the world you came from and how did that happen?

Advantage—you have all the tools to get back to your real life, but you lack the skill to use the tools. There is a Black Box, which gives you options of doors you can go through to find your correct life. But you don’t know the rules for choosing the correct door, and there are myriad doors to choose from. How do you find the world you want to get back to and who did this to you? Was it the man who took your place in the world you were taken out of?

That man is you, in your old world, yet he is not you. He is a pretender who is now sleeping with your wife. You are now him, in another reality, yet you really are not him. In the world you are now in you are the owner of Velocity Laboratories and you are rich and powerful, yet you can’t seem to get back home to your wife and depose the usurper.

Who is the real Jason Desson? How many Jason Desson’s are there? When Jason Desson goes into the Black Box that he created at Velocity Laboratories which allows him to visit myriad alternate realities, how will he discover the world he wants to re-enter? And he has a limit on the number of tries he can make to go home.

Whose place are you taking and who took your place? How do you use the Black Box? How do you choose the reality that will take you home? These are the questions facing Jason Desson in Dark Matter by Blake Crouch.

This book is dynamic and unbelievable yet, could it happen? It grabs your attention from the very beginning and takes you along on Jason’s travels and discoveries. A futuristic detective story/science fiction mix, Dark Matter is an exciting adventure about an unusual situation. It will definitely keep you interested and entertained, from first page to last.

I saw it at The Harvard Bookstore so go on in and grab it. But look out which door you leave the store by. Anything can happen.