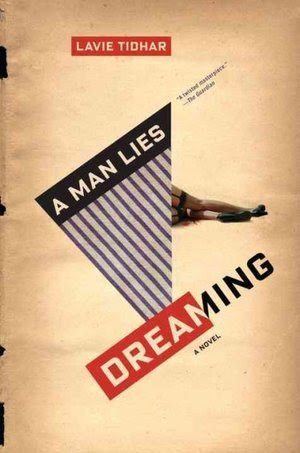 In A Man Lies Dreaming, the man Wolf is a down and out private eye who was once the most powerful man in Germany. He was known for his dynamic speaking ability, whipping crowds into a frenzy while surrounded by his infamous Black Shirts.

His life has changed. Wolf works out of a shabby office in 1939 and still hates the Jews. It irks him that sometimes he has to work for them and wishes they had all remained in Germany, a country where most of the Jewish people are imprisoned and exterminated in concentration camps.

The story also involves a man named Shomer, a Jewish man who is in one of the German camps. He tells his story of horror where 9 to 12 people sleep on wooden pallets the guards call bunks, and line up at 4 a.m. every morning to wait two hours for the prisoner count. Then they are allowed to go to the latrine where another prisoner times them while they are relieving themselves.

The horror of the camps is illustrated in Shomer’s diary. Ironically Wolf keeps a diary too. In the beginning Wolf is hired by Isabella Rubenstein to find her missing sister by the name of Judith. Her father had arranged to have Judith smuggled out of Germany but something went wrong.

Back in those days it was not surprising for plans to fall apart. At first Wolf says that he does not work for Jews. But Isabella reminds him that now he has no choice in the matter, while she puts an envelope of money on his desk. Wolf takes the money and consummates the deal.

Wolf works out of an office in a desolate neighborhood filled with low-life crime. When he goes out the door of his building, whores solicit him constantly. He knows many of them are Jewish; he sees blue numbers on their arms.

Wolf constantly finds himself working for the very people he hated. Were it not for the Fall in Germany, he would still be in power. But now Germany is controlled by the communists, many of whom are Jewish. The world has changed for Wolf and his henchmen.

A Man Lies Dreaming is a book of a world inscribed by irony. While Wolf is violated by the people he hates, Shomer dreams of freedom in the camp.

In the middle of the night, Shomer wakes to relieve himself in the bucket, and as he does a little of the liquid seeps over the edge. Shomer knows it is his bad luck to have to dump the bucket; the man who fills it to the brim is the man who must empty it. He lifts the heavy bucket and takes it out of the dorm, the liquid splashing on his dirty bare feet. He dumps it and then brings it back in and crawls onto the bunk filled with other sleeping men. It takes a while before he sleeps; it will be time for roll call any minute.

Wolf, after being accused falsely of the murder of a whore, is released by one his old comrades who wishes to employ him. They remember the days when people hid when the name of the Wolf was mentioned. They called him “the Drummer” because of the way he pounded the podium as he spoke, his voice rising, spittle flying from his mouth, as he whipped the crowd to a frenzy.

Those days are past him now. He is nobody.

Lavie Tidhar creates an amazing world that could have been, but wasn’t. There are things taking place in this story that create a reality that is true even today. While it is a past that never took place, at the same time, it did take place in another form. Tidhar is a writer that commands the page and when you read his book, his world becomes yours.

I wish I could say more but I don’t want to spoil the story for you. This book is not for the faint of heart. Lavie Tidhar spins a tale of magic and shows the human condition for what it is. In a book that seems impossible, the dark fantasy becomes real.

Lavie Tidhar is a writer from Israel who won the World Fantasy Award in 2012 for his imaginative book called Osama, which is still available. His history bending writing is totally unique.