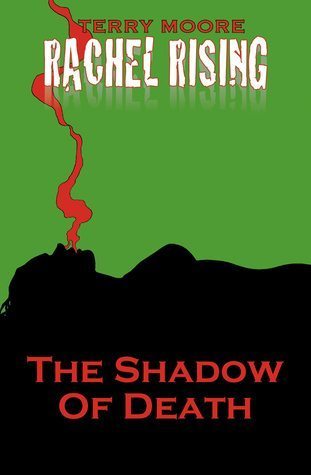 Imagine, if you can, digging yourself out of a grave in the ground, and not having any memory of how you wound up there or of who you really are.

Rachel Rising is an amazing tale, but I really did not realize it at first.  Let me clarify. We are talking about a graphic novel, drawn and written by Terry Moore.

You see, comics are so short and they come out every two months, so they can be difficult to follow.  Rachel Rising will be concluded with the 42nd issue, so there is a great deal of story to follow. It is complex, and I found myself, once I started buying trades 1—5, of which there will be 7 when the tale is complete, reading the story and flipping back through the pages because an event was occurring that triggered remembrances of something that happened much earlier. There are 6 individual comics in a trade.

I’m ashamed to admit that I started buying the single comics in the beginning and discontinued reading them at around issue 11.  However, if I had been able to conveniently flip back to earlier comics and reread certain sections, I would never have discontinued the series.

Rachel Rising is a wonderfully complex, detailed adventure that must be read in large chunks at a time.  I’m a writer and I remembered how wonderful were Strangers In Paradise and Echo, also by Terry Moore, so I decided to give Rachel Rising another chance.  When I bought and read the 5 trade paperbacks altogether, with total enjoyment, I was amazed. Terry Moore has outdone himself. The story is carefully plotted and drawn and Terry didn’t miss a trick.

The story takes place in a town called Manson, which has a history of conspiring against women of nature. Many were tortured and hung. But it is now present day, and the worm has turned, so to speak.

Rachel Rising is populated by a group of unique characters. There are the women who were hung and have come back, Rachel being one of them. Her friends are also unique.

Aunt Johnny is an undertaker and happily committed, in a lesbian relationship.

Then there is Doctor Siemen, who keeps company with his wife and claims she is agoraphobic. Actually, she doesn’t go out because she is quite dead.

The women of the past and present, and a killer little girl named Zoe, attempt to set things right in Manson. Justice must be done. This story has ghosts, dire wolves, a dog that becomes possessed with the spirit of Aunt Johnny, and an active mortuary. There is also a priest who, well, you’ll see.

Rachel Rises and hits the road, picked up by a Good Samaritan who is quite concerned about her state of being. She looks awful good for someone who spent 3 days in a shallow grave.

The first thing she does is go home and take a shower and then, at the sink she coughs up pieces of earth and notices a bruise around the front of her neck, like a rope necklace.

Then, shortly after a quick stop at the local car repair shop, Rachel drops in on at Aunt Johnny at the mortuary. At first Johnny doesn’t recognize Rachel.

Then Rachel gets Aunt Johnny to take a break and go with her to the gravesite. Aunt Johnny jumps into the grave and calls out Rachel’s name and Rachel says, “I’m here,” and finally Aunt Johnny recognizes her, in some sense of the word.

Then Rachel goes to a bar looking for her friend Jet, and has an encounter of the fourth kind with a woman who is going to be married soon, or so she thinks.

Rachel lays hands on her and sees her future and it is dark indeed. Rachel gives her and her husband to be some advice that makes the worms turn. All of this takes place within the first chapter of book one with much more than half of the book to go.

As I said, there will be 7 books in all, or 42 comics, if you choose to buy them that way. Comic #1 sells for about $100 now because of the popularity of the story, and the rumor that the story has been optioned for a television show.

But, by all means, read the comic books first. By the time you read this, all the later issue comics will be out and the latter ones you can pick up for a normal price. However, I recommend buying the trade paper backs which contain approximately 6 comics in each trade.

If you really like this story, and I think you will, there will be a special hardcover Black Edition that will be limited to 750 signed and numbered copies. It is due to come out in July, and if you pre-order, you will get a sketch with the book signature. I have Terry Moore’s hardcover book of the story called Echo which now sells on Ebay for $199. It originally cost $75. I’m not going to go into the story of Echo, but trade paperbacks are available also from Abstract Studios, on the Internet or your local comic shop. Echo is extremely well done.

Rachel has risen and she is not the only one come back to avenge the innocent women who were killed by the gentle folk of Manson. A great yarn which is illustrated and penned by Terry Moore. Terry’s a nice guy too. It is amazing what must be going on in his head. I wouldn’t want to go there by myself.