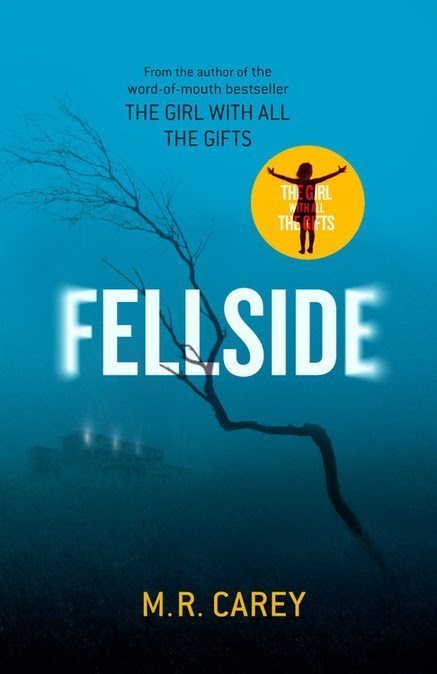 Fellside is a women’s prison. If you have ever been in a prison, you’ll know that ghosts roam the tiers and the smell of fear and old sweat socks drifts up your nostrils. I hope you have never experienced this but, in this book, M. R. Carey brings you into the prison and the minds of lost souls waiting for the date of release, which may be the date of death, whichever comes first.

Jess Moulson is convicted of murder. She doesn’t remember much, just a big fire that burnt her apartment and there was someone else who died in the fire. It was a ten year old child named Alex. Everyone, including Jess, thinks she started the fire in a heroin induced nod and insisting on pleading guilty was the only thing Jess could do. Her boyfriend, John Street, was the guy who turned her on to heroin. He had other secrets too.

Jess thought she deserved a death sentence and decided to administer it to herself through a hunger strike. For a while it looks like she will be successful and the prisoners cheer her on. Nobody likes a child killer. One of the leaders of a drug ring takes bets on her death.

But as the end draws near, Jess finds herself in what seems like a dream world where she meets Alex, the boy who died in the fire. Is he really a boy? He convinces Jess that his death was not her fault.

Fellside is a spook show where there are ghosts, drug deals, psycho-bullies and crooked guards. It appears that everyone is against Jess. In the middle of all this terror, Jess insists on maintaining her position of personal justice and responsibility.

In prison there are many junkies and for the junk to get in, pipelines of travel are necessary. When an act of violence destroys a vital link in the drug train only a doctor will do, especially if he has secrets to protect, as Dr. Salazar, nick-named Sally, one of the erstwhile good guys, has a secret that could cost him everything. Jess’s one protector in the prison is compromised.

But is the doctor Jess’s only protector? As Jess and Alex travel through the dreams of inmates at night, they learn about the secrets of the dreamers, and discover the truth about Alex, who is her tour guide to the dreamworld on the edge of death.

Jess carries out a one woman struggle against the bullies who run the prison and the drug runners who come up with a new scheme that involves Jess to bring drugs into the prison. Jess’s knowledge and her sense of responsibility and justice put her in the ring of danger and even the ghosts appear to be limited in power.

As the story unravels, Jess becomes seduced by the dream world and eventually this brings her to fight to uncover the true horror that has made Jess appear guilty. She fights to bring the truth into the light, even if it jeopardizes her own freedom.

Who is guilty? Who is innocent? The web of intrigue spins from dream to reality and brings them together in such a way that the spirit world retaliates against those who hurt the vulnerable and others fight to retain their sanity in a world that will never look the same again.

Fellside is a story that will keep you guessing as you walk the tiers and the work rooms of the prison of the same name. In prison, everyone is guilty—with the exception of the innocent. M. R. Carey, who first made his name writing comic books under the name Mike Carey, has created a world of steel and stone where, once you go in, you may never be free again. He has written many books under the name of Mike Carey.

M. R. Carey’s other book under this name is called The Girl With All The Gifts and this book, by the same publisher, is now being made into a movie that is in actual production. The Girl With All The Gifts is a dystopian tale about a young girl in a very special school with locked doors and cement walls. What is it about the children in this school that makes the adults shudder with fear, especially when the young girl named Melanie says in jest, “Don’t be afraid, I won’t bite!”
But back to Fellside, a different type of story in a different type of world. M. R. Carey is one talent, not only to be watched, but to be read. It’s a tough book to put down once you cross into the prison world of Jess Moulton and Alex, who is not what he seems to be.

It would be no surprise if Fellside was optioned for the big screen in the near future.

Fellside has just been released for the book buying public and is available, or will be very soon, on line or at The Harvard Bookstore, a great independent bookstore near the center of Harvard Square.