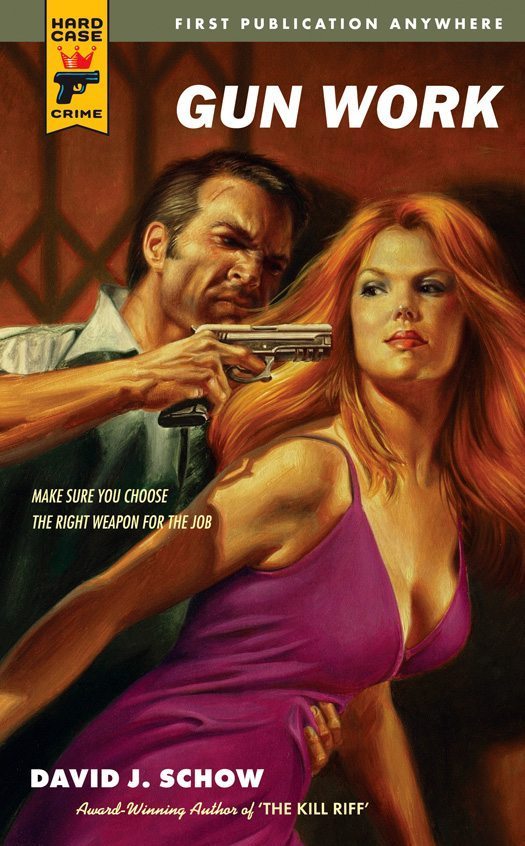 David J. Schow is one of those writers that not enough people have heard of. But those readers who are in the know have read his “splatterpunk” stories.

One of his best novels, and he has a few, is called Gun Work. There is this guy named Carl Ledbetter who did a tour in Iraq with a guy named Barney. It was one of those things where Carl saved Barney’s life in a tight situation. In war, things like that happen all the time.

It doesn’t make people friends but some people use a life-saving event as a “you owe me this buddy” and when things get hinky in their lives, they reach out.

It appears that Carl’s wife Erica has been snatched by some low-lives in Mexico and they want one million dollars for her return. Carl knows that Barney is a master at Gun Work and Carl reaches out to him.

Now Barney has been through some stuff and he’s kind of laying low and doesn’t want to get involved with gonzo stuff like this but he asks Carl how much they want for ransom. When Barney hears the amount, he doubts that Carl can come up with it but Carl says he can, but don’t ask how.

Carl just wants someone reliable to make the drop with him in Mexico City in case things go sideways. In situations like this they often do. Carl already has one of Erica’s fingers that the kidnapers sent to him to show that they are not just playing. And they are threatening to send more of them plus other anatomical parts if Carl doesn’t cough up the dinero.

Life comes cheap in certain parts of Mexico. Barney really wants no part of this fiasco but he feels that a debt is a debt and then he can be through with Mr. Ledbetter for the rest of his life. That is, if he has a life after this is over.

There’s more to tell and David J. Schow can tell it. David has a number of crazy thrillers and in his stories, anything can happen. This writer has been around a while. In 1987 he wrote a short story called Red Light which is included in one of his books of short stories called Lost Angels.

Red Light was the winner of the 1987 World Fantasy Award for Best Short Story. Short stories are David J. Schow’s specialty and he has a number of short story books out. Zombie Jam, Eye, & Lost Angels are just three of them. I can tell you this—they rock. Don’t read them before you go to bed—well, you can. Then you’ll have entertaining nightmares.

Besides Gun Work, David J. Schow has re-released in a special edition, a book called The Shaft put out by the Centipede Press. In The Shaft a drug kingpin named Bauhaus has fronted two kilos of cocaine to some dealers named Cruz, Jonathan, and Jamaica, who get raided and have to throw the drugs down a ventilation shaft in the rooming house so they can escape.

Bauhaus wants his drugs back but there’s a hitch. Something lives in the ventilation shaft and it is not nice, to put it mildly. The supernatural horror mixes with the creepiness of the drug trade.

But back to Gun Work for a minute. Carl and Barney go to make the drop and things go very wrong. Carl was supposed to come alone, not with hired firepower.

Erica’s frantic voice comes over the phone. “They say you broke the rules—you contacted someone—now they are going to take another finger and want two million—the first million is just a down payment” and then she was cut off.

This is just the beginning of a situation where Barney, who is an excellent gunman, finds himself lied to and quite possibly, is an expendable.

The question is—can Carl Ledbetter trust his own wife? Gun Work spins you into a seedy underworld where even your friends might point their guns at your back. Who is the hostage and who is the player?

David J. Schow takes you on a ride through places you only want to read about—if you find yourself there, well, it could very well be game over. You better know how to use that gun—and who to point it at.

And then there are the masked Mexican wrestlers—but I’ll let David J. Schow introduce you to them.

Gun Work by David J. Schow is a Hard Case Crime book published by the Dorchester Publishing Company. You can find them on the web at www.HardCaseCrime.com