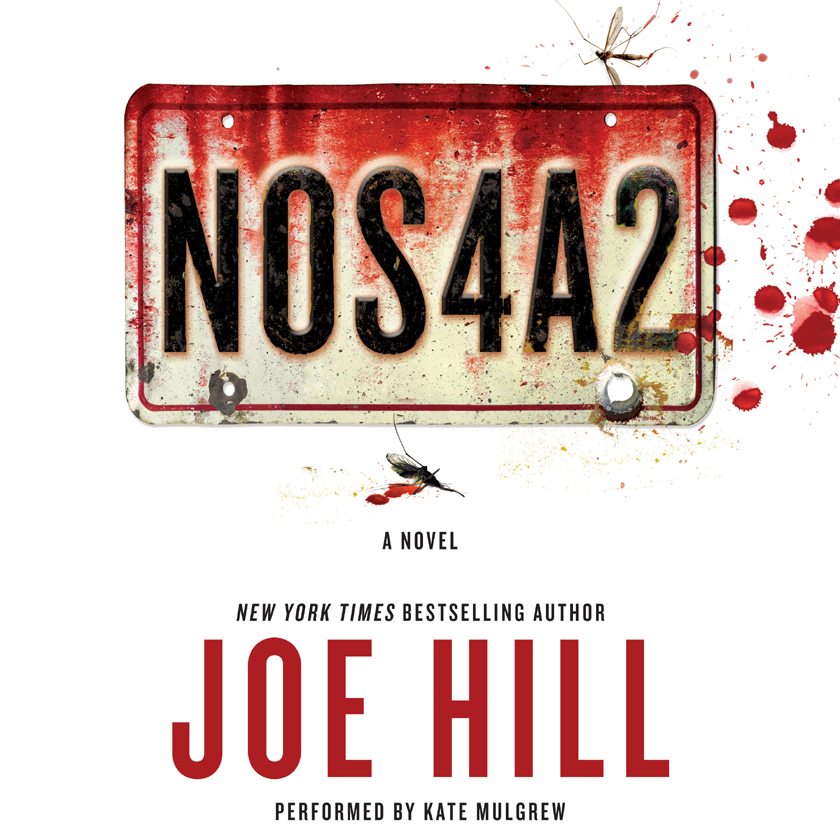 Like father, like son, some people say. Joe Hill is Stephen King’s son and the apple didn’t fall far from the tree. As a matter of fact, this apple is sweeter if you like your books tinged with tales of horror and love. Joe Hill slips you quickly into his world like slipping a noose around your neck while you are eating a lollipop, then, before you know it, the rope is tight and your feet are off the floor.

Joe Hill doesn’t just do this with his new book NOS4A2, but all of his books, The Heart-Shaped Box, Horns, his novellas—Gunpowder and Thumbprints, do exactly the same thing. What is nice about them is, each book does it differently and Hill doesn’t waste a word. You might say, like one of the lead characters in NOS4A2, Charles Talent Manx, that Joe Hill has a talent for it himself.

When Charles Manx first appears, an old man who seems to be in a coma, one gets a taste of what evil is truly about in three pages. How does this happen? Well, Manx just opens his eyes and talks to his nurse, Ellen Thornton, and a few words are enough to spiral her to hell.

Charles Talent Manx drives a 1938 Rolls-Royce Wraith, with the license plate NOS4A2, right into and out of a place called Christmasland. Christmasland! Sounds like a place any child would want to go to have fun, but wait. Obviously, there’s more to it than that, of course, of course.

In this delicate tale of terror, there is a little girl named Victoria McQueen, a young princess of the fair sex who is capable of white magic. Why, she can ride her bicycle over an old wooden covered bridge, called the Shortaway, and come out miles away from where she started.

Stephen King, in his books, usually has that knack of taking sides, sheer evil against goodness with a fatal flaw, and one must pay attention or else things go wrong. Joe Hill has that same talent but is more succinct.

I love Stephen King’s books—one of my favorites by him is The Dark Tower, an eight book series of mystifying American magic with demons, wraiths and gun-slingers. It’s the modern Lord of the Rings but King does waste a word or two in the tale.

As a writer myself, I look for those places that could have been edited but Joe Hill has me mesmerized. The more I read, the more I like. Multi-talented, Joe Hill writes graphic novels too, an exceptional example is Locke and Key. But we’re getting off topic, leaving Christmasland before we’ve even arrived.

I did mention Victoria McQueen, didn’t I? She is the young girl who rides her bicycle over the old wooden bridge, the Shortaway, which takes her exactly where she wants to go. Whether it is good for her or not. Sometimes, when she stays too long in the places the bicycle takes her, her eye begins to pulse, like there’s pressure in her head that’s not good for her. Magic has it’s price.

Charles Talent Manx’s old Rolls-Royce Wraith takes him on roads no one else can find, which disappear him when he drives. He needs that car just like Victoria McQueen needs her bicycle and magic bridge.

There are people in this world, a few special folks, who can go places no one else can go. They don’t need to buy a ticket but they still have to pay a price. Folks can get away with anything, anytime but there is always a price to pay. Like when Victoria McQueen, unwanted by her mother, definitely unwanted by her father, looks for trouble on the other side of the Shortaway bridge, she finds it.

Victoria rides right into Christmasland, a magic place run by Charles Manx. He likes to take little boys and girls there, and then, well, they never come back. Sometimes Charles hooks up with other characters with kinks in their thinks, such as Bing Partridge who put a nail gun to his dad’s temple and thought it was a joke. When he pulled the trigger his dad didn’t do much more thinking at all. Then Bing took his mother right out of her grief.

Bing was lonely, and he had dreams of Christmasland where a kindly old fellow drove a big old Rolls-Royce Wraith. After a hard day at the factory where he worked with solvents that weren’t too healthy if you were around them too long, the Wraith with the license plate NOS4A2 just pulled up in front of his house and Bing knew he was in heaven. But his goal was Christmasland and only Charlie Talent Manx could get him there.

There’s so much more but my job isn’t to spoil the ride for you. Once you get in the Rolls-Royce Wraith built in 1938, you’re in for the ride of your life. What’s left of your life, that is.

I’ve told you plenty but there are no spoilers here. I’m not saying whether Victoria McQueen gets to grow up and have a child of her own; a child that can do magic like hers. If she had a boyfriend, because she wouldn’t be the marrying kind, he’d be a Biker who knew his engines. Maybe she’d write children stories. But you’ll need a Search Engine to find out about that.

This is Joe Hill’s third novel and, like his father Stephen King, this might be The Stand for him. His first two novels were really, really good but this one will take you places you’ve never been before. Joe Hill doesn’t waste a word. NOS4A2! Get it, Read it. You’ll love it and you’ll curse me for taking you to Christmasland!