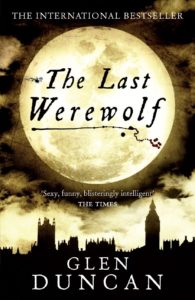 When are the passing years more than one can bear? Jake Marlowe can answer that question. Jake is a werewolf closing in on his 201st birthday. He’s outlived almost everyone he’s loved and, being a werewolf who shifts into a savage thinking beast every full moon, Jake is challenged when it comes to intimacy.

He has one close friend, a guy named Harley, who, ironically, works for WOCOP (World Organization for the Control of Occult Phenomena) and one of their specialties is hunting and killing werewolves. But Harley loves Jake. And he’s just given Jake the bad news.

It’s tough being a werewolf. Relationships with women are strictly about sex, a lot of it, you see, part of being a werewolf is an extremely high libido. Unfortunately, the song that goes “you only hurt the one you love” happens to be deadly true if you’re a werewolf.

Sure, Jake loves Harley, but there’s no sex involved here, but it is convenient because Harley, being a member of WOCOP, keeps Jake one step ahead of the trackers. But now Jake is the last werewolf. Indeed, that means that the entire focus of the group is on this hunt.

Jake is extremely intelligent and this has helped him become very rich. He owns a number of companies and has numbered bank accounts and stocks under different names, and he’s reached the point where he can easily change identities and go anywhere in the world. But that doesn’t change the terrible fact that on every full moon he changes into a werewolf and kills.

Jake has tried killing animals but nothing satisfies like human blood and meat. This, as you might guess, has some extreme drawbacks. Oh, yes there are vampires in the world too. However, vampires have the gift of speech. They have become very organized and rich. They are primary funders of WOCOP, which is aware of their existence, and the hunters leave the vampires alone as long as they follow certain rules.

Werewolves and vampires hate each other. To quote from the book, “A vampire has written: ‘the great asymmetry between immortals and werewolves (apart from the obvious aesthetic asymmetry) is that whereas the vampire is elevated by his transformation the werewolf is diminished by his. To be a vampire is to be increased `in subtlety of mind and refinement of taste; the self opens the door of its dismal bed-sit to discover the house of many mansions. Personality expands, indefinitely. The vampire gets immortality, immense physical strength, hypnotic ability, the power of flight, psychic grandeur and emotional depth. The werewolf gets dyslexia and a permanent erection. It’s hardly worth making the comparison.’”

Obviously there is extreme prejudice between the two. That may be because the werewolf can be sexually active; vampires can’t. That, itself, can cause hatred between the two species. Werewolves can communicate with each other telepathically, but they don’t run in packs; they are solo. And, as far as anyone knows, there has not been a female werewolf. It takes a certain type of stamina to survive the bite of a werewolf; not many do, and it has been a long time since anyone has.

Which brings us to a world where all of WOCOP’s forces are focused on the last werewolf—Jake Marlowe. And Jake has had enough of life. The yearning for a mate has worn him to the point where he suffers from extreme depression. WOCOP, because of the way they operate, only get satisfaction from killing the beast, not the man. So they must wait and be there when Jake turns.

Jake has always avoided them in that narrow window of time because of his friend Harley’s help but this is the first time that all the focus is on him. And it’s quite possible, by now, that Harley is suspect. Between that and Jake’s depression, it appears that, if this were a game of cards, Jake is ready to fold.

Ah, but! I’ve told you nothing, no spoilers, no wreckage of the tale. The Last Werewolf is written by Glen Duncan, a brilliant young novelist who is very well read, and he lives in London. Duncan is a literary master and spins a yarn that will keep you warm in cold weather. Like The Girl With The Dragon Tattoo, the book begins slowly, so you must sip it like an extremely hot bowl of delicious chocolate.

Next, this book is no “Twilight” referring to the vampire series written by Stephanie Meyers. Not to knock that series but, in comparison, that series is “monster lite” whereas this is Poe mixed with Neil Gaiman. Glen Duncan is a writer’s writer, using many literary references to spice the drink.

The Last Werewolf is literally one of the best werewolf/vampire books I have ever read. There is also a special treat that goes along with this book. It has to be bought separately though. It is a CD by a group called The Last Tuesday Weld and the name of the CD is The Last Werewolf—A Soundtrack.

Glen Duncan takes part on the CD with words from the book. Excellent to listen to the CD and read the book at the same time if you wish. The book is available at The Harvard Bookstore in Harvard Square and the CD is available at Newbury Comics.

There are many twists and turns on this haunted verbal road. I highly recommend it. If it is done right, it would make a wonderful movie. The Last Werewolf is a Borzoi Book published by Alfred A. Knopf. It was originally published in Great Britain by Canongate Books, Ltd., Edinburgh. There is a quote from the Selected Poems of Thom Gunn within the story.