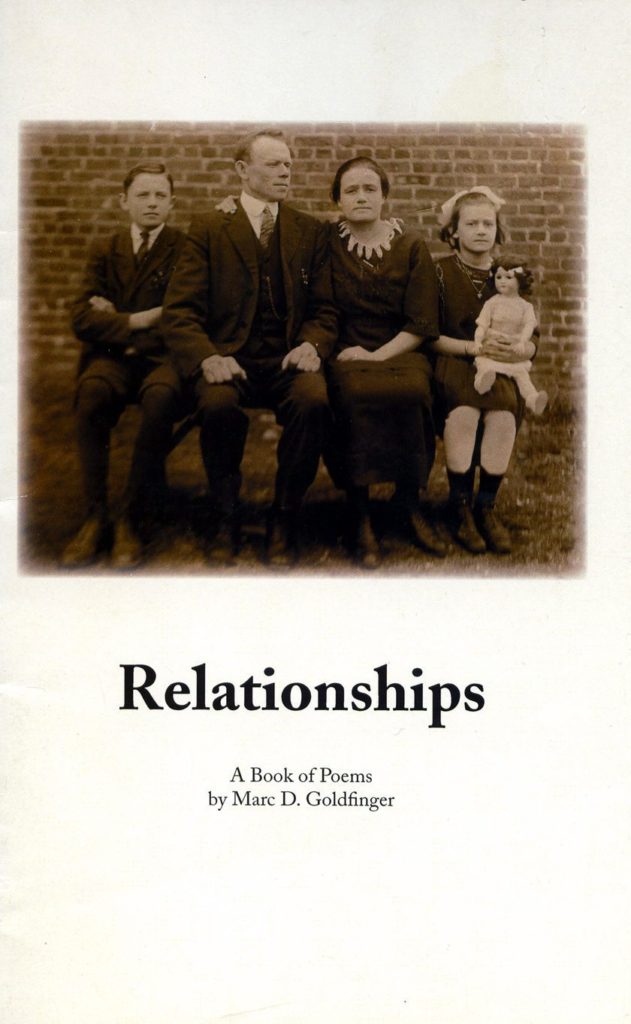 In this stunningly powerful book of 28 poems, Marc D. Goldfinger purposely eschews the definition of love and relationships as we know it–substituting the cute cupid, fairy tale versions of Juliet’s feverish, almost sickening search for Romeo–for tough, gritty urban poems clearly not for the faint of heart. With a stunning clarity his cast of characters speak for themselves–spinsters and hustlers and junkies and hookers who float zombie-like through the rough and tumble areas of Boston, Gloucester and Cambridge, Massachusetts. In the poem “The Wake Up,” the poet gives us a peek into the single day of a troubled woman named Mary Esther: “…shadows cast by life…grins down the throat of hard luck…and then he kisses her forehead, says, “It’s all right now, breakfast is ready.”

To most of us, unrequited love and adoration is a powerful emotional force in the crucible of the heart expressed in a variety of ways. But in the seedy underworld of drug addiction, the application of love in his poem “Junkie Love” has a different connotation: “…True love/ is spitting the dope/right down the middle/or even/giving her/the bigger cut…”

Goldfinger is not some queasy, apologetic poet. He wears his drug addiction like a badge of honor. Women blow in and out of his life like the wind. They share dope. In a ” A Couple of Kids” Goldfinger is an honorable recorder who witnesses snatches of a conversation between an innocent young teenaged girl who seems totally oblivious to her boyfriend being high on heroin as he rambles on about promises to buy her an engagement ring, relocate to the plush warm State of Florida, where, in a house with a white picket fence, they will live happily ever after. The girl sits in front of the 7-11, begging for spare change. Goldfinger ends the poem with a haunting scene that seems to portend their doom.

Yet like a prolific painter he beautifies the decadent lifestyles of these wayward souls afflicted with the hungry armature of heroin addiction.

And love is sometimes vindictive–like the woman who shredded Brillo into his spaghetti–and laced his heroin with digitalis.

These poems are brilliantly composed with the symphonic smoothness and elegance of jazz. The poet serenades the reader with the lyrical beauty of torch songs. This book of poems by Marc D. Goldfinger is a love supreme.

Reginald S. Lewis is a widely published, award-winning African-American poet, essayist, and a playwright — on Pennsylvania’s death row. He is the author of two books of poetry, titled: “Leaving Death Row,” at  www.1stBooks.com. His most recent book “Inside My Head” is available at www.iuniverse.com and www.amazon.com. To write to Reggie  Reginald S. Lewis #AY2902,175 Progress Dr., Waynesburg, Penn.  15370-8089