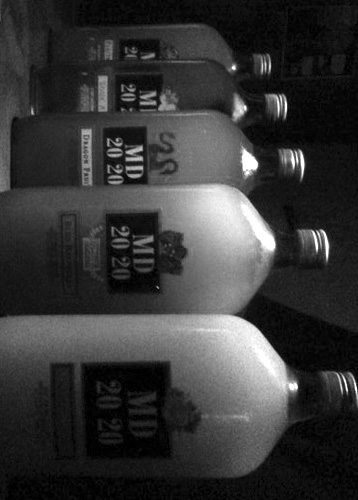 I have always been infected, I confess
my heart is with the outs. The left-outs,
the cast-outs, the out of its, out of their
minds, possessed by that which has
them talk to Gods or Demons.

Our spiritual heads rotate on our necks,
look into our eyes if you can, see
outside society, outside civilization,
the jungle roars from our outside eyes.

I confess. I am one of them, yet
even outside them too. The ride-outs,
the white-outs, the black-outs. I have
been told, by one authority
or another that I will always
be an outsider, an outrider,
an outlaw, I dance on
the webbing of civilization.

I confess. I love the dope-fiends,
the tramps, the petty thieves,
the panhandlers, the whores,
the poets from the fringe, the hustlers,
the winos in the alley draining the spider
from a bottle of Maddog 20-20, the dark
bars and coffee houses where the smoke hangs
heavy, where junkies draw up
water from the drain of a dirty
sink to quiet the voices,
where the spirits mutter
divine phrases to themselves. Everyone
understands, no one is talking.

I confess. I love the flame-outs,
the burn-outs, the shut-outs, the put-outs.
The forced-outs, the unclaimed. We know
each other, give one
another the nod as we go
about our business collecting
the hebephrenic voices of the Gods.

Okay, I confess. I am haunted by the ghosts
of the past, the specter of the future,
by women who look at their husbands
with fear in their eyes, by men who walk
docile behind angry wives,
by the counter-worker who cowers
when the manager walks
by, by police who swagger, by guns
in human hands.

I confess. I am haunted by people
who think it is okay to develop
diseases to be used as weapons of war,
by people who spend millions of dollars
of taxpayer money to find out what
a president has done with his penis,
by non-smokers who think auto-exhaust
is okay, by companies who drill oil
wells deep in the ocean and lack
the technology to stop a well
that blows one mile under
the water, then banter while
ecosystems die, by talk shows
that promote mob mentality,
by children who kill each other.

I confess, I have always been
infected, I am only haunted

by what is real.